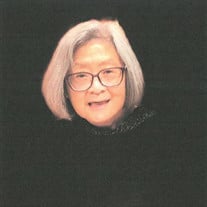 Margaret Elizabeth Moy Ching Woo Leong June 23, 1943 - May 18, 2021 With deep sorrow and a heavy heart, we mourn the loss of Margaret Elizabeth Moy Ching Woo Leong who passed away on May 18, 2021 at the age of 77 in Oakland, CA. She was born on June 23, 1943 in Peoria, Illinois. She died of a brain hemorrhage. Her father's name was Herbert Ying Vick Woo and her mother's name was Kate Jue woo. She was married to Tony C. Leong, Jr. on February 9, 1974 after dating 3 years prior to their marriage. Margaret earned the following degrees: A.A., B.A. (Fine Arts) from SF State University, MSW (Social Work) from UC Berkeley and a Ph.D. (Clinical Psychology) from the Wright Institute in Berkeley. She received her LCSW license in 1980. She worked for Alameda County Health Services for 31 years working initially as a Patient's Rights Advocate, in the County's Adult Services Asian Unit as a Case Manager and finally providing direct mental health services and case management to her patients. She was an active member of SEIU 535 became a Steward, Chief Shop Stewart, held offices as VP and Secretary and was a delegate to the 535 State Executive Board. After retirement she continued as a member of the Alameda County Employee SEIU 1021 Executive Board. Margaret and Tony traveled to many places around the world from Beijing and Paris to St. Petersburg and Madrid as well as to several states in the U.S. Margaret's passion was scrapbooking and collecting and putting up her precious Hallmark Ornaments every Christmas. She loved all their dogs and continued to make scrapbooks of them until her death: Leo, Foxy, Pee Wee, Mojo, Lady, Bandit, Jake, Gus, Nellie and Max. Margaret is survived by her husband, Tony, her Sister, Doris (Greg, husband) her brother, Harold, her sister, Martha (Sil), brother-in-law, James, sisters­ in-laws, Annette and Helen and a half-brother, Anthony, nephews (Kim, John, James (Bo), nieces, (Katherine, Jennifer, Pamela, Mai Ann, Michele), cousins and Ivy, her "honorary daughter". And, of course, Bella, their one-eyed blind dog whom she literally spoon-fed daily as she did with all their previous dogs. She was kind and friendly to everyone she met and many of her neighbors fondly remember their conversations with her as she greeted them while walking Bella. She had a forgiving heart and a warm soul. She will be missed by those who loved her and especially missed by her husband, Tony. She is predeceased by her parents and half-sister, Silver. Visitation (wake) will be held at the Chapel of the Chimes at 4499 Piedmont Avenue, Oakland, CA 94611.Margaret loved and contributed to animal shelters and sanctuaries so in lieu of flowers, please contribute to such organizations of your choice.

The family of Margaret Woo Leong created this Life Tributes page to make it easy to share your memories.

Send flowers to the Leong family.