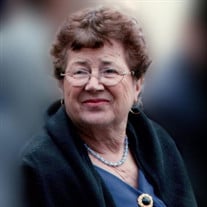 Mafalda Tamburrino (nata (nee) Mazzucco), July 22, 1932 – June 18, 2021 Mafalda Tamburrino of Concord/Walnut Creek, CA aged nearly 89, passed away peacefully Friday evening June 18th at Tiffany Court, her assisted living home in Walnut Creek, CA surrounded by loving family. Tiffany Court had been her home since 2018. She was originally from Scauri, Italy, a beautiful coastal town on the Tyrrhenian Sea and along the famous Roman Via Appia (Lazio region). She was a long time resident of Oakland’s Rockridge district where she and husband, Elmo raised their four children. Her birth family, parents Francesco and Caterina, and siblings, Maria, Giuseppe, and Elena are all deceased but she is survived by many nephews, nieces, and other descendants still living in Italy. As a youth she enjoyed her life on the coast of Italy with plenty of biking and mare (sea) activities for fun. Her youth however was very impacted by World War II as she was just a teen at war’s end. Her family worked through many challenges in recovery from the war. As a young woman she worked as a seamstress. In 1955 she married Elmo Tamburrino (deceased October 2015) and immigrated to California’s Bay Area where Elmo’s family resided. Mafalda and Elmo were blessed with four children, Pietro Antonio, Franco, Carlo and Caterina and raised them at their long time home on Monroe Avenue in Oakland. Although immigration was challenging, she was able to work through language and assimilation with her usual grace and style. It was in that home in Oakland that she thrived with her family. It was a great nesting locale and all benefitted with local family and friends as well as a strong Italian American immigrant community presence, “Paesani”, who we still love today. With the exception of various school volunteer and work positions she reveled in activities of home and nurturing her children. The nurturing was especially highlighted in her fabulous cooking; she was famous for her pizza! Her family fondly remembers her love of traditional Sundays with homemade sauce and polpette (meatballs) and outings to local parks and ice cream. Her former seamstress days fostered her love of fashion and making clothes, knitting, and sewing for family. California getaways to Lake Tahoe, Russian River and the Monterey coast were important and reminiscent of her “Mare” (Sea) days. She enjoyed many trips to Europe, particularly her native Italy and staying connected to roots. Upon retirement by Elmo, they relocated from Oakland to Concord to enjoy a more tranquil setting in their golden years. In addition, she and Elmo accomplished a lifelong dream to purchase a vacation home in Italy which the family still enjoys today in the “Paese” (Hometown), Elmo’s hometown Santi Cosma e Damiano, very near Mafalda’s Scauri. Love, loyalty, and devotion to family were Mafalda’s sacred priorities in life and this manifested in daily living and traditions. She took great pride in that role, it’s meaning and paramount importance of raising a good, honorable family. Even in her final years, her role and presence still set the tone. She adored her children and was a living example of her favorite sculpture by Michelangelo, La Pieta’. Mafalda is survived by sons Tony, Franco, Carlo and daughter Caterina, daughter and son-in- laws, Paulette and Chris, her seven grandchildren, Francesca, Domenic, Franco, Danielle, Alessandro and Giancarlo, and Christian, and one great grandchild, Taylen. She is also survived by many nephews, nieces and relatives both in the United States and Italy. Grazie cara Mamma, ti vogliamo un mondo di bene e sentiamo una profonda mancanza di te ma viverai nei nostri cuori per sempre. Thanks dear Mamma, we love you and feel a profound loss with your passing but you will live in our hearts forever. Private funeral services will be held. Condolences may be sent to Chapel of the Chimes in care of the Tamburrino Family. In lieu of flowers, memorial donations may be sent to the Alzheimer’s Association, www.alz.org or in honor of husband, Elmo, the National Stroke Association, www.stroke.org, or charity of choice.

The family of Mafalda Tamburrino created this Life Tributes page to make it easy to share your memories.

Send flowers to the Tamburrino family.