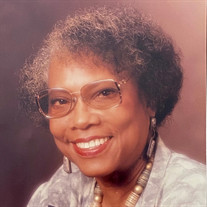 Obituary Lunecia Nell Baxter Lunecia Nell Carter was born February 6, 1930, in Marlin, Texas, the only child of Eddie Smith and Lewis B Carter. During her childhood, the family relocated to Austin, Texas. Although Lunecia was an only child, she lived near her young aunts and uncles, who were more like siblings. Lunecia was also close to her maternal Grandmother, Elizabeth Smith, who loved to spoil her. At the young age of 16, Lunecia graduated valedictorian of her high school class and entered Houston Tillotson College in Austin, Texas. After graduating with an undergraduate degree in Education, she was ready to take on the world! At a time when many young adults were moving west for new opportunities, Lunecia moved to Oakland, California to live with her aunt and uncle. This is where she met the love of her life, Gerald A. Baxter. The two fell madly in love, and after a two-week courtship, they married in Los Angeles in 1952. They settled in Oakland and bought their first home. Lunecia followed in the footsteps of her parents, who both were educators. She earned her teaching credential from UC Berkeley and began a fulfilling 40-year career in the Oakland Public School District. Lunecia was a beloved teacher at Brookfield, Garfield, and Markham Elementary Schools. In fact, former students would return years later to thank her for setting them on a path of academic and career success. Although teaching students was her first love, Lunecia also held various leadership positions throughout her career in the School District. She also earned a lifelong teaching credential and master’s degree in Education from UC San Francisco. Lunecia was not only blessed with a fulfilling career, but also, a beautiful family. The loving union of Lunecia and Gerald produced two wonderful sons, Gerald Baxter Jr. and Alan Baxter. Lunecia was a devout servant of God. Over a 40-year span, she was a member of Taylor Memorial United Methodist Church in West Oakland and Grace Methodist Church in East Oakland. Being a dedicated wife and mother with a busy career, you would think Lunecia had limited energy for other activities. On the contrary, she was an active member of several organizations, including the Berkeley Bay Area Chapter of her beloved sorority, Delta Sigma Theta, Inc. and the United Methodist Women’s Group. Lunecia had many creative talents. She was a master seamstress who made custom clothes for herself and her family, including elaborate Halloween costumes for her grandchildren. She loved to cook, and on weekends made delicious meals for her family to enjoy the coming week. She loved making crafts, many of which her friends and family treasure to this day. A social butterfly, Lunecia loved hosting parties at her beautiful home. She loved traveling, and visited locations throughout Europe, Africa, and North and South America. After the passing of her husband in 2004, Lunecia moved to the Chicago area, near her son, Alan and daughter-in-law, Aretha. She moved into an independent living senior community, Luther Village, where she made new friends and enjoyed retired life. Lunecia loved Luther Village. She participated in many activities, including fitness classes, needlepoint, the Women’s Group and the Educators Group. When she learned there was no Writers Group, she founded one. This gave her the opportunity not only to lead the group, but also, write her memoirs. In 2018, Lunecia returned to the Bay area to be closer to family and lifelong friends. She spent her final years at Sunrise Assisted Living of Oakland Hills where she enjoyed social events, games, writing, making beautiful art, and spending time with family and friends. Lunecia is survived by son Alan; daughters-in-law Ann and Aretha; grandchildren Christopher, Tammy, Andrew, Alecia, Ryan, Alan Jr., and Alexander, and great-grandchildren Kendrick, Mayah, Nova, and Amani. Lunecia was preceded in death by her mother, Eddie Smith, father, Lewis B. Carter, husband, Gerald A. Baxter, and son Gerald Baxter Jr. Lunecia leaves a legacy of living life to its fullest. She was a beautiful, warm, and creative spirit who cared deeply for her family and friends. She will be forever loved and greatly missed.

Obituary Lunecia Nell Baxter Lunecia Nell Carter was born February 6, 1930, in Marlin, Texas, the only child of Eddie Smith and Lewis B Carter. During her childhood, the family relocated to Austin, Texas. Although Lunecia was an only child,... View Obituary & Service Information

The family of Lunecia Baxter created this Life Tributes page to make it easy to share your memories.

Send flowers to the Baxter family.