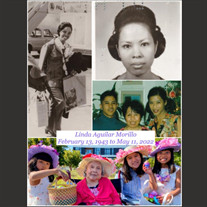 Linda Aguilar Morillo Dear Mother, Proud Grandmother and Loving Sister Linda is survived by her two children, Carol Morillo Kawamura and Sjay Aguilar Morillo and grandchildren, Madelyn Morillo, Stella Morillo Kawamura and Tabitha Morillo Kawamura. She also leaves behind her siblings and their spouses Rudy and Lolita Aguilar, Fred and Leonie Aguilar, Lumi Aguilar Sexton, and Apolinar Jr. and Evangeline Aguilar, cousins, nephews, nieces, godchildren and relatives. Linda was born in Las Pinas, Rizal, Philippines on February 13, 1943 to Apolinar and Ameli Aguilar. She was Baptized at Saint Joseph Church on March 14, 1943 by Reverend Father Pablo Herbaux. She attended Saint Joseph’s Academy from Grade School to High School in Las Pinas. She attended Mapua Institute of Technology University in Manila and graduated with the Degree of Bachelor of Science in Chemistry on August 8, 1965 with a focus on Industrial Chemistry. She was a member of the sorority Kappa Gamma Mu. She was a member of the National Association of Mapua Alumni Inc. She was certified Technical Laboratory Training by the Institute of Science and Technology in Manila on June 4th, 1969. She moved to the United States on April, 4, 1970 to San Francisco, California. She became naturalized on March 30, 1976 She was married to Saturnino Morillo, Jr. in 1971 with the final dissolution of marriage in 1977. She successfully petitioned for her mother and siblings to join her in California from the Philippines. She moved from San Francisco to Oakland and lived in her home for 48 years. She worked as a Laboratory Technician for Morwear Paints in Oakland and stopped working when her health was affected by Rheumatoid Arthritis. She started a second career in 1991 and became a certified Travel Agent after completing courses at Vista College in Berkeley and helped many friends and family with travel tickets to the Philippines. Linda remained as active as possible raising her children and helping to raise her niece and nephews and other children in our family. She was warm and welcoming to everyone she met and anyone who came to our home. She enjoyed listening to her favorite musical artists and watching programs about travel, cooking and farming, and enjoyed watching her grandchildren grow up around her. She passed away with her children at her side and is missed dearly by her family. Her legacy will always be remembered. May she rest in everlasting peace. The celebration of Linda’s life will be on Friday, June 3rd, at Chapel of the Chimes 4499 Piedmont Ave., Oakland beginning at 10:00 am.

The family of Linda Aguilar Morillo created this Life Tributes page to make it easy to share your memories.

Send flowers to the Morillo family.