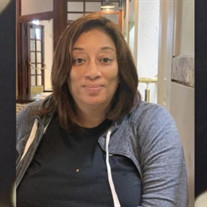 Lendora “Linda” Blacksher, the daughter of the late Artis Blacksher, Sr. and Jean Harris Blacksher was born in Oakland, California on October 13, 1961. She was a faithful, devoted daughter, sister, mother, grandmother, granddaughter, niece and friend. Her earthly journey ended January 24, 2022. Linda graduated from Castlemont High School in Oakland, California. She was a loving and supportive mother to her children, April Johnson and Charles Johnson. She looked forward to spending time every day with her only grandson, Gabriel Johnson. Their special loving bond was evident from the very beginning. As a single mother, Linda was a balanced blend of “sugar and spice” and a fierce protector as needed for April, Charles and Gabriel. Linda had a great big heart and exhibited it by her love and generosity to family and friends. Melody Castro and Linda were close friends (“like sisters”) for over 30 years and Linda was like an aunt to Melody’s daughter, Krystal Castro. Aaron Wright and Sharmila Wright were her “bonus son” and “bonus daughter”. Linda also extended that big heart of love to her late grandmother, Lucy Harris (“Mama Lucy”), by spending several weeks in Arkansas assisting with her caregiving. No greater love was shown to a father than the love and caregiving Linda extended to her late father Artis during his latter days. Even while Linda was ill herself, she also extended that same love and concern for her mother, Jean Blacksher, imploring her children and her uncles (Jean’s brothers and their spouses) to “look out for her mother”. Her last thoughts were ensuring everyone knew what she expected in the event of her demise. Linda was also a great southern style cook. Those southern style cooking skills were passed on to her from her father Artis and she passed those skills on to her daughter April. She loved to cook and served up a feast that seemed to be enough to feed the whole block. Her deserts, such as her “sock-it-to-me” cake were just as delicious. Linda was shy and did not like having her picture taken and also did not like to be called Lendora. We all loved her “British Accent” she developed and lovingly teased her about it. Linda leaves many family and friends to cherish her memory: -Her mother, Jean Harris Blacksher (Oakland, CA); -Her children April Johnson and Charles Johnson and grandson Gabriel Johnson (Oakland, CA); -Her close companion and friend, Frank Hunter (Oakland, CA). -Her brothers, Andre Carriere and Art Douglas Blacksher (Oakland, CA); -Her Niece, Ire Blacksher (Oakland, CA). -Her Uncles and Aunts: Leonard Harris (Sedonia) of Arkansas; Robert Harris (Glenda) of California; Harold Harris (Angela) of Arkansas; Charles Harris (Jimie) of Arkansas. Anna Sampson of California; Esther Harris of California; Ruth “Dollie” Cole of California; Ruby Jewel Blacksher of Texas; Georgia Marie Hill of California. Linda also leaves a host of cousins and other relatives and friends. Linda will be missed by all who knew and loved her sweet and generous spirit. We praise God for sharing her with us. We celebrate her homegoing even in the midst of our sadness since we will no longer enjoy her physical presence. We find solace in knowing that she is now at rest.

The family of Lendora Blacksher created this Life Tributes page to make it easy to share your memories.

Lendora “Linda” Blacksher, the daughter of the late Artis Blacksher,...

Send flowers to the Blacksher family.