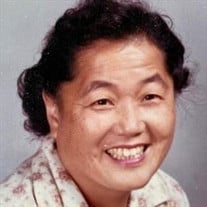 Kikuko "Kiku" Inouye Ito was born to Asano (Watanabe) Inouye and Kikuichi Inouye in Brooklyn, New York on December 22, 1922. She grew up in Brooklyn and later in the Morningside Heights neighborhood of Manhattan. Starting at age 5, she worked as a cashier and hostess for her father's Nikko restaurants, where she perched on a high stool. Her favorite pastimes were going to the "picture shows," bowling and to Yankee Stadium, where she attended every Ladies' Day for a nickel. She was active in the Japanese American Shudokai (later Japanese American United) Church, and her first job was as secretary for the National Council of Churches office on Riverside Drive. In 1945, she met Masaji Ito after he returned from the all-Japanese American 442nd regiment in Italy, and they were married in October 1947. They loved to go to the beach (Coney Island and Miami) and travel, including on sales trips to gift shows throughout the South. They were married for 53 years until his death in 2000. They adopted their daughter Susan in 1959 and moved to Park Ridge, New Jersey. She worked in the main office at West Ridge Elementary School from 1966-1996. She saw generations of schoolchildren pass through West Ridge, and was beloved by many. Kiku served as a Girl Scout leader and taught camping skills like making donut holes over a campfire. She bowled in a Japanese American league, as well as with locals in Park Ridge. She also played racquetball and tennis, and excelled at basketball, in spite of being 4'11". She was the primary companion and caregiver for her mother Asano, who accompanied the family on every trip, including to Japan, as well as annual trips to Miami Beach. Her granddaughters, Mollie Ito-Washington and Emma Asano Roark, meant the world to her. When Mas passed away in 2000, she moved to Oakland, California and was the center of their multi-generational household for 17 years. She joined a Nisei league at Albany Bowl, attended Berkeley Methodist United Church, helped cook family meals with chef Alyson and sewed hundreds of quilts with her friend and teacher, Louise. With the family, she enjoyed visiting Japan at 83, snorkeling in Hawaii at 86, and hiking in Yosemite at 90. She loved accompanying her son-in-law John to Golden State Warriors basketball games. Kiku enjoyed community support through J-Sei and Extending Connections, a Japanese elders' luncheon group at Buena Vista Methodist Church in Alameda. She had a deep attachment to the family dogs, Scooter and Chacha. She loved chocolate in all forms, but candy and Mallomars were favorites. She was a connoisseur of "junk food" and scoffed at the idea that soda, ice cream, French fries, chili dogs and pizza were unhealthy. (she lived to 98; she might be right). In her last years, she resided at Sunrise of Oakland Hills and then at Lake Chabot Care Home in Castro Valley, where she was beloved by caregivers. She passed peacefully with her family by her side on February 1, 2021, thanks to Hope Hospice. She was predeceased by her parents and her brothers, Kiyoshi and Asao Inouye. She leaves her daughter Susan, son-in-law John Roark, granddaughter Mollie Ito-Washington (Michael), great-granddaughter Sequoia Ito-Washington, and granddaughter Emma Asano Roark. She is deeply loved and missed. A virtual memorial service will be scheduled this spring. In lieu of flowers, the family requests that donations go to J-Sei, https://donatenow.networkforgood.org/1389316

Kikuko "Kiku" Inouye Ito was born to Asano (Watanabe) Inouye and Kikuichi Inouye in Brooklyn, New York on December 22, 1922. She grew up in Brooklyn and later in the Morningside Heights neighborhood of Manhattan. Starting at age 5, she worked... View Obituary & Service Information

The family of Kikuko Ito created this Life Tributes page to make it easy to share your memories.

Send flowers to the Ito family.