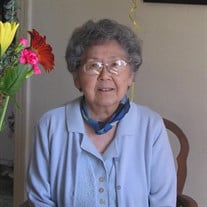 Kay Nomiyama Matsutani 1926 – 2020 Kay Matsutani died peacefully on March 25th at Mercy Retirement and Care Center in Oakland at the age of 93. Her son Roy was a daily visitor and had been at her bedside the afternoon before. She was a beloved wife, mother, grandmother, aunt, sister-in-law and friend. Kay grew up in Tacoma Washington where she attended school and worked in her family’s laundry business until her family was ordered to relocate to one of the internment camps during WWII. Her family eventually was sent to Minidoka, Idaho, where she completed high school in 1944 and was accepted to Ursinus College in Pennsylvania, earning a B.S. in chemistry. Eventually Kay decided to move back to the West Coast, settled in Oakland, CA and met her future husband, Harry Matsutani. They were married in June, 1951 at Sycamore Congregational Church in Oakland, CA. Kay and Harry were active members in the Japanese American congregation of Sycamore Church. They brought their three children to Sunday School every Sunday and contributed many hours of service and leadership. Kay was a devout Christian who was an extensive reader and especially enjoyed attending Bible Study groups. When her children were older, Kay took a job with Byers Insurance Company as a book-keeper/admin assistant and worked there for 25 years. Kay was an avid gardener and loved to spend time every day in her garden that produced delicious beans, zucchini tomatoes and much more. She hosted many family holiday get-togethers and church meetings where all were treated to her delicious cooking and baking. After Kay and Harry retired, they were able to fulfill one of Kay’s dreams of traveling the world. Their travels included a Middle Eastern tour of the Holy Land, Europe, and Asia as well as vacations in NYC/ New England, Epcott Center in Florida and Lake Louise in Canada. Kay always said how grateful she was that she’d been able travel so much with Harry. He passed away in 1997, after she lovingly cared for him at home for two years. Kay’s grandchildren remember her as a warm and loving Grandma/Baba who was always ready with smiles, hugs and finger jello. To her children, she was a steady parent who was unfailingly there with meals, rides, laundry, a clean house, and attendance at every single performance, concert and basketball game. She showed her love through actions and duty. She was an extensive reader and a lover of poetry. She was free of bitterness, adept at finding the positive in every situation, and guided by the spirit of “gaman” or perseverance in the face of adversity. Kay is survived by her beloved grandchildren Alex and Katie Janss and Wendy and Kristy Matsutani, her son Roy and her daughter Susan Janss (David). She is preceded in death by her husband Harry and her son John (Kimiko). Due to the current situation, no service is planned at this time, and the family hopes to announce a remembrance at a future date.

Kay Nomiyama Matsutani 1926 &#8211; 2020 Kay Matsutani died peacefully on March 25th at Mercy Retirement and Care Center in Oakland at the age of 93. Her son Roy was a daily visitor and had been at her bedside the afternoon before. She was... View Obituary & Service Information

The family of Kay Matsutani created this Life Tributes page to make it easy to share your memories.

Send flowers to the Matsutani family.