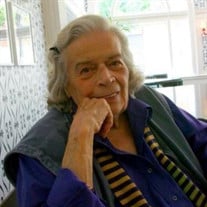 Kathleen E. Sullivan was a force to be reckoned with. She was articulate, smart, demanding. Folks were fascinated by her mercurial, insightful mind always searching for lucidity. And although she had a quick wit and good sense of humor, she... View Obituary & Service Information

The family of Kathleen Sullivan created this Life Tributes page to make it easy to share your memories.

Kathleen E. Sullivan was a force to be reckoned with. She was...

Send flowers to the Sullivan family.