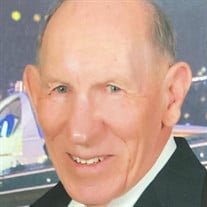 John Jewett (Bud) Earle Jr, 92, a beloved husband, father, grandpa, and papa passed away on July 24th, 2020 in Brentwood, California with his loving wife (Patricia) holding his hand. The son of the late John Jewett Earle Sr., Marie Elizabeth Earle, and brother to his late sister Margaret Elizabeth Adams. John attended Oakland High School and then attended the University of California Berkeley obtaining a BA with a Major in History in 1951 and returned back in 1957 to obtain a BS in Engineering. He was also the President of his Fraternity PI KAPPA PHI. He later studied and passed the Structural Engineering Test. He spent most of his working years working for Shapiro, Okino, Hom and Associates, now known as SOHA, in San Francisco. An avid fan of public transportation and exercise, John would usually take the bus to San Francisco and walk 2 miles to his office in the mornings and then back 2 miles to the bus stop at the end of the day. He played on the company softball team for several years and loved the camaraderie. He retired at age 81. Even though he loved to work, his love for his wife, his 6 children, his 3 stepchildren and 7 grandchildren was undeniable. He loved spending family vacations camping in the National Parks of California. He also loved amusement parks and loved taking his children on the rollercoasters. He loved lighting off Fire Works and Cherry Bombs in mailboxes with his late best friend John Ball. After retiring he found the love of taking Cruises with his wife. John was also a loyal Oakland A’s fan and enjoyed attending home games at the Oakland coliseum. GO A’s! Surviving family: Wife Patricia Earle, 3 sons John Earle Jr. (Jenny), David Earle (Jennifer) Robbie Earle and his 3 daughters Alicia Utley (Jony), Meg Dengler (Mike) and Alison Earle and his 3 stepchildren, Nancy Easter (Craig), Chris Knudson, and Tina Knudson. John also is survived by his 7 grandchildren Kristina, Kayla, Katie, Ben, Sarah, Zach and Cassie (who he lovingly referred to as “little girl”), and his first wife Joan Earle. Before passing, John requested that a Celebration of Life be held at Scotts Restaurant in Walnut Creek. Because of the closures of restaurants right now this celebration will be held at a later date and an announcement will be made. John will be cremated and laid to rest in a private family service at Chapel of the Chimes in Oakland California close to both of his parents. To ensure the health and safety of our community, we are following all guidelines set by local, state and CDC officials. If you are planning on attending a service, please contact the funeral home in advance, so that we can plan accordingly.

The family of John J Earle JR created this Life Tributes page to make it easy to share your memories.

Send flowers to the Earle family.