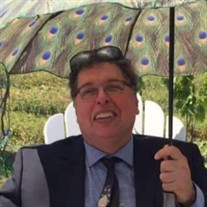 Jesus A. Portillo passed quietly in his sleep on May 25, 2022. He had been fighting heart issues for many years, and that big heart of his finally decided it was time to rest. Before presenting the facts of his life, mention must be made of him and why this is such a loss to so many. Jesus did have a big heart, a big laugh, an undying faith, and an unending supply of jokes. That is what he is remembered for by everyone who came in contact with him, even if it was a barista giving him his cappuccino. He will forever be remembered for his happiness, and most particularly, his kindness. When he would call, he would identify himself as “your friendly, neighborhood Jesus.” That was him. Born on June 18, 1946 to Esperanza and Alfred Portillo and raised in Chicago, Illinois, Jesus graduated from St. George in Evanston, Illinois, and went on to attend theater school through the Goodman Theater. When visiting his sister Carol Dudley in the 1970’s, after she had relocated to the Bay Area, he decided that was where he wanted to make his home. He entered the taxi cab industry, making enduring friends. In the mid-1980’s, he lived for a while in Massachusetts, but returned to California in 1999 during which he and Ralph Hoffschildt, his friend of 40 years, made an epic crosscountry trip stopping at all the ballparks they could along the way. Which leads to his lifelong love of baseball. From a young age, Jesus had loved the game, fostered by his beloved Chicago Cubs, and in particular, Ernie Banks. When he moved to the Bay Area, he switched allegiance to the San Francisco Giants, but never forgot the Cubs. Jesus’s return to the Bay Area proved to be the beginning of a new chapter in his life, one in which his immeasurable contributions to the many organizations he either joined or founded, all with the aim of bettering the lives of others, primarily youth at risk. Among some of the organizations that benefitted from his contributions was Faith in Action, and he was the founder and leader of the Aspire and Achieve program, which provided tutoring, mentoring, workshops and field trips to students in the Manhood Development program at Oakland Technical High School, further evidence of his commitment to his causes. In joining the Kiwanis Club of Oakland and serving as President of that chapter, he found another avenue in taking charge of their Scholarship Committee. Taking great pains in ensuring that the program thrived even during the months of Covid lockdown, setting up Zoom meetings and devising fair and accessible methods for interviews. His membership in the Lakeshore Avenue Baptist Church proved to be a crowning point of his life, and his joy and feeling of accomplishment enhanced with the many ways he contributed to the Church’s activities and, most particularly, Sunday School and youth activities. He was a very proactive member of their Social Justice Committee. His energy was boundless, his sincere interest in the people who benefitted from his attention, limitless. Jesus is survived by his sisters Carol Dudley, Lupe Bach, and Diane Collins, and his brother, Alfred Portillo, and by his cousin Daniel Portillo who he counted as one of his best friends. There are also many cousins mostly in the Chicago area who will miss his visits, and most especially, his nephew John Dudley, with whom he shared a loving, close relationship. He is also survived by Kasa Cotugno, his partner of 23 years, Michelle and Clem Cotugno, Jessica and Carmen. There will be a memorial service at 1 p.m., Lakeshore Avenue Baptist Church on June 18. His birthday

Jesus A. Portillo passed quietly in his sleep on May 25, 2022. He had been fighting heart issues for many years, and that big heart of his finally decided it was time to rest. Before presenting the facts of his life, mention must be made of... View Obituary & Service Information

The family of Jesus Anthony Portillo created this Life Tributes page to make it easy to share your memories.

Send flowers to the Portillo family.