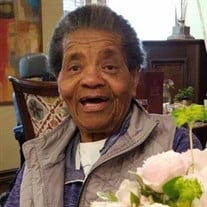 Jessie Lee Leno 6/5/1929 to 7/20/2021 Wife, Mother, Educator, Community Activist Jesse Lee Leno (Robinson) was born June 5th 1929 in Leesville, Louisiana, to her father Julious, and her mother Sally Rose. She married William M. Leno Jr. on June 10, 1956, and lived in Oakland. CA. where they raised four sons during their marriage. She died on July 20, 2021, in Oakland, California, at the age of 92. Throughout her life Jessie was always motivated by her friends and family, her community, and her overriding faith in God. Jessie's passing was preceeded by her husband William in 2005. She is survived by her sons William, Charles, Julius, and James, six grandchildren, three great-grandchildren, and a host of sisters, brothers, cousins, and other relatives all across the country. The interment will be held at Rolling Hills Memorial Park, 4100 Hilltop Dr, Richmond, CA 94803. Per her request, there will be a very short, very private graveside ceremony for immediate family only. If you would like to acknowledge her passing, her wish was that, in lieu of flowers or gifts, you make a donation to a worthy charity in her name: https://www.charitywatch.org/top-rated-charities/all-charities

The family of Jessie Leno created this Life Tributes page to make it easy to share your memories.

Send flowers to the Leno family.