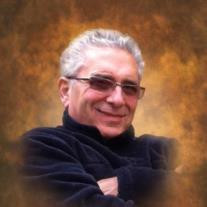 James Frank Vercellino Jr. Jim passed away on January 6, 2015 after a vigilant fight with Brain Cancer with his family by his side. Jim is predeceased by his parents, James Vercellino Sr. and Nicolatina Capoinio Vercellino. Jim was born at Oak Knoll Naval hospital in Oakland, CA on 22 Sept 1943. Jim graduated from St. Mary’s College High School in June 1961. He attended Merritt Junior College and served in the United States Air Force Reserves. He was a Partner in Banana King Produce at the Oakland Produce Depot. In 1965 he married Carole Breilh and had two children, Kenny and Laurie. He was working at International Harvester when he was called up for active duty during the Pueblo Crisis. Following his discharge, Jim attended Las Positas College and worked at Albertsons and Crown Chevrolet. In 1979, he married Kathy Gallego and had a son James Vercellino III. In 1981, he opened a produce business in Castro Valley and then in Housewives Market in Oakland. During this time, he met Kathleen Lagorio and married in 1994. Jim and Kathleen went on to own and operate City Lights Home and Office cleaning business for the last 15 years. Jim was an active member of AA for the last 40 years. He touched many lives and left a lasting impression with a core group of “guys” and many friends within AA. Jim is survived by his loving wife Kathleen, son Kenneth Vercellino (Kelly), loving daughter Laurie Robertson (Kent), son Jimmy Vercellino III (Syliva) and stepson Harrison Korsmoe (April), sisters Judy Vercellino Spaulding (Bruce), Vicky Vercellino Roush (Mike). Grandchildren, Conner, Jake & Kate Vercellino, Kayla & Kade Robertson, Syliva Ann & Christian Vercellino and Braelyn Korsmoe and many nieces and nephews. Jim will be remembered for his sense of humor and his love for family. He had a way to leave a lasting impression on anyone who met him. He was one of a kind. He will be greatly missed by his family, friends and his best canine friend Sierra. The family would like to Thank UCSF Neoro-oncology Department, Dr. Susan Chang and Charlotte Hui, RN for the dedication, care and support. In lieu of flowers, a donation can be made in Jim’s name at UCSF Foundation B1573. Memorial Service will be held on January 15, 2015 at 1pm, Chapel of the Chimes Chapel 4499 Piedmont Avenue, Piedmont, 94611. https://oakland.chapelofthechimes.com/obituaries/James-Vercellino/

James Frank Vercellino Jr. Jim passed away on January 6, 2015 after a vigilant fight with Brain Cancer with his family by his side. Jim is predeceased by his parents, James Vercellino Sr. and Nicolatina Capoinio Vercellino. Jim was born at... View Obituary & Service Information

The family of James Frank Vercellino Jr. created this Life Tributes page to make it easy to share your memories.