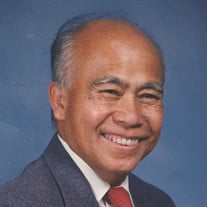 James Hechanova Obando Resident of Piedmont, CA February 2, 1930 – December 4, 2019 James Hechanova Obando, loving husband of Lutgarda Obando (deceased) and devoted father of Michael Obando, Maureen Obando Rhodin, David Obando, Angela Obando (deceased), and Robert Obando, passed away peacefully at home on Wednesday, December 4th surrounded by his family and friends. His is survived by his grandchildren--Jason Obando, Nicholas Obando, Erica Obando, Gabrielle Obando, Cicely Rhodin, Danielle Rhodin; and his great grandchildren—Melody Obando, Dylan Obando, Nieem Obando, Narayan Amiri Obando. James, son of Raymond and Mauricia Obando, was the oldest of seven children—Jose (deceased), Fe (deceased), Remedios (deceased), Rosario (deceased), Antonio and Carlos. He was born February 2, 1930 in the town of Haro, Ilo ilo, Philippines, where he spent his childhood. As a young adult, he moved to the city of Angeles, Pampanga, 30 miles northwest of Manila. James received his Electrical Engineering degree from De La Salle University in Manila, Philippines. He served four years in the United States Coast Guard stationed in Boston, where he inspected lighthouses up and down the East coast. Becoming a naturalized citizen upon discharge from the Coast Guard, he accepted a design position with the Naval Architecture firm of Morris Guralnick & Associates which ultimately brought him to the San Francisco bay area. Transitioning to Civil Engineering, James then took a position with Kaiser Engineers where he worked with distinction for over 30 years, until his retirement. James loved to be outdoors and work with his hands creating wonderful construction projects, and completing endless repairs and improvements to the properties he acquired with his wife. He enjoyed the fruits of his extensive gardening which included his very large collection of orchids spread over the entire landscape of his home on Highland Avenue. They were his pride and joy, and evidence of his patience and nurturing skill. He also loved giving back, volunteering with the Piedmont Police Department, Piedmont Community Church, Habitat for Humanity, and the Boy Scouts of America. The Pinewood Derby track he built for the Scouts in 1968 is still being used in Piedmont to this day. James will always be remembered for his infinite patience and love, and those who mourn him and loved him dearly in life have some respite in the knowledge that he is at peace, and once again with his forever love, Lutgarda.

The family of James Obando created this Life Tributes page to make it easy to share your memories.

Send flowers to the Obando family.