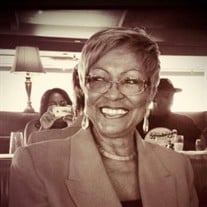 Jacqueline “Jackie” Catherine Jackson was born to Walter and Jeannette Ray in New Orleans, Louisiana on December 16, 1942. The family moved to Oakland, California when Jackie was a young girl. She gave her life to Christ at an early age and renewed her spiritual relationship later in life and became a member of Allen Temple Baptist Church in Oakland CA. Jackie’s primary education was in the Oakland Unified School District. She attended Berkeley High School and graduated from Oakland Technical High School in 1960. After attending Durham College - North Carolina, Jackie returned to Oakland and began her professional career. Jackie married LaVan Patton in 1963. To this union, she was blessed with her son Kurt Patton. In 1968, Jackie met the love of her life, James E. Jackson. They were inseparable and through this union Jackie gained her bonus children Keith and Pamela whom she loved dearly. James and Jackie’s love endeared them to each other for over 54 years until she departed. Jackie was a dedicated and hard worker. She worked beside her mother in their home business, JC Ray Tax Service, for decades. Jackie worked for the U.S. Social Security Administration for over 35 years and retired in 1997. She continued working in the family business until August 2021 when and officially retired. Jackie had a beautiful soul. Her family and close friends were the fortunate recipients of her interminable love. Her smile was never ending and would light up a room. She possessed a magnetism that radiated out to all who knew her. To know her was to love her. Jackie was a loving and caring wife, mother, grandmother, aunt, friend and neighbor. She was known to many as Jack, Jazzy and Cool Breeze. Jackie was an excellent cook. She made a mean pot of red beans and rice and her gumbo was “Off the Hook!” Jackie loved music and loved to entertain in her lovely home in which everyone was welcome. She never met a stranger and made everyone feel at home. Jackie leaves to cherish her memory a host of loving family and dear friends.

Jacqueline &#8220;Jackie&#8221; Catherine Jackson was born to Walter and Jeannette Ray in New Orleans, Louisiana on December 16, 1942. The family moved to Oakland, California when Jackie was a young girl. She gave her life to Christ at an early... View Obituary & Service Information

The family of Jacqueline "Jackie" Catherine Jackson created this Life Tributes page to make it easy to share your memories.

Jacqueline “Jackie” Catherine Jackson was born to Walter and...

Send flowers to the Jackson family.