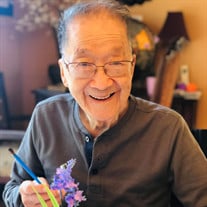 Oakland – Jack Lee Ong lived a long, happy life and passed away peacefully on June 15, 2021. “Uncle Jack,” as he was called by many, was a well-respected leader and deeply loved by those who knew him. His charisma, popularity, and willingness to help others often resulted in locals affectionately calling him “the unofficial Mayor of the Oakland and San Francisco Chinatowns.” Born in Hoy Ping Province in China on October 19, 1923, he came to the U.S. as a “paper son” when he was 9-years-old and was raised by his brother Chester Ong and family. After graduating from Oakland Technical High School in 1942, he joined the U.S. Navy. In 1946, he ended his military service as a Chief Petty Officer, a position of great pride since it was rare for a person of Chinese descent to ascend to such a position in World War II America. A lifelong resident of Oakland, he married May Fong Tom in 1947 and the couple raised seven children in the city, together emphasizing the importance of family, love for education, and kindness towards others. Jack helped many in the Chinese community improve their lives. In 1946, he joined the Ying On Association and assisted immigrants with navigating life in the U.S. Relying on his strong communication and negotiation skills, Jack built solid relationships with local officials, bridging cultural and linguistic barriers. Jack solved an array of problems for others including their barrier to citizenship and access to housing, educational opportunities and employment. By 1978, he had been appointed National President of the 9-chapter Ying On association in California, Nevada and Arizona, and he later won the title 3 more times. He became the National President Emeritus in 1988. Jack was a successful entrepreneur and founded the first Chinese-owned Accounting and Real Estate business in 1958 in Oakland Chinatown with his nephew Jim Ong. In 1964, Jack became a naturalized citizen. He went on to open several other businesses including grocery stores, and Bok Sen (Eight Immortals) Restaurant with partners Ed, Calvin and Raymond Ong. Bok Sen grew to be a local favorite and many chose to celebrate significant life occasions there, such as wedding banquets, Red Egg and Ginger parties, retirements, and other celebrations. The restaurant anchored Oakland Chinatown for 14 years before its closing in 1990. Due to his popularity and magnetic personality, Jack was then recruited by the Hong Kong East Ocean Restaurant in Emeryville as Director of Public Relations, a position he held for many years. In 1985, Jack founded the Oakland Chinatown Chamber of Commerce and became its first President. Prior efforts in Chinatown to organize had not been successful, but Jack canvassed the local businesses and signed up sixty businesses to forge a unified voice in community affairs. The organization continues to identify economic, social and community issues, advocate for policy change, and promote international trade and local business. Jack was known for his zest for life, warm smile, enthusiastic handshake, and for making people feel special. He never forgot a face or a name. Jack leaves behind his 7 loving children (Helen, Margaret, Nadine, Nancy, Connie, Greg and Steve), 12 wonderful grandchildren, nephews Jim, George and Stanley Ong, John Ko, niece Marianne Siu and brother-in-law James Tom. Jack was preceded in death by his cherished wife May, parents Lung Lin Ong, Seto Shiu, siblings Chester, Lim, Cheming Ong and sons-in-law Andrew Jong and Henry Yu. Public viewing will be held at the Chapel of the Chimes in Oakland at 9:30, Thursday, July 1. The service will be held at 10:30. Please contact Nancy Ong at [email protected] for further information. Please contact Nadine Ong at [email protected] or 510-747-8675 if you would like information on sending any cards, notes or sharing memories.

The family of Jack Lee Ong created this Life Tributes page to make it easy to share your memories.

Send flowers to the Ong family.