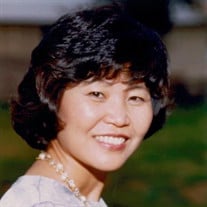 Heesun Kim (1932-2022) Heesun Kim, my Mother, was born in Seoul, Korea in May 21, 1932 and grew up in one of the most turbulent and difficult times of the Korean history: the Japanese Colonial period, the US Military occupation and the Korean War. As a teenager she began to dream about going to the US where she thought she would have more opportunities and better life. In her early twenties, Mother was introduced by her older brother to Won Kyung Pak, who fell in love with her for her intelligence and beauty. They began their life together and five children, two of them from Father's first marriage. By the early 1970s, swept by the great wave of Asian immigration, my parents started their immigration process to the US. Since Father worked in the US Military Base in Seoul, he became somewhat proficient in English; Mother memorized several English lesson books. Parents thought that studying and practicing the art of Acupuncture would be ideal, though Acupuncture was virtually unknown in the US at that time. Initially they practiced independently, but a year later, they were fortunate to open their own Acupuncture clinic in Cambridge, Massachusetts. Mother eventually managed two clinics, and personally oversaw all the aspects including the treatment. Parents were pioneers: giving patients a new treatment modality offering hope and better quality of life for chronic and acute conditions which Western doctors could not offer any other alternatives or recovery; Massachussetts General Hospital recognized and eventually referred their patients to my parents. Major newspapers and TV programs recognized their contribution as well. In her first year of practice, Mother was sued for malpractice. She was able to defend herself well, despite her limited English. She received a generous award with which she bought the biggest RCA TV money could by. We enjoyed it very much. And yet Mother never neglected her household responsibilities. She was a superb organizer, cook and mother. Quiet, self-effacing, and always listening to others, she never talked about her accomplishments. She always stressed on being kind and generous. What I most admire about Mother is her quiet strength and determination to live out her life independently and courageously. In 2013, when I brought Parents to the San Francisco Bay Area, Mother was walking three miles a day. But after a flu vaccine shot, she got violently ill with cough which resulted compression fractures of long standing. Mother struggled with her extreme despair and depression when she wrote this poem called, “A Life of Mayfly.” A Life of Mayfly* I am grateful for this day given to me, living this day not knowing whether another might come. To wait and withstand, it is not easy to persevere. It is our fate, not having control over living and dying. Nevertheless, with a grateful heart, I live one day at a time. Time passing silently, accompanying pain along with it; anticipating the day of healing, I see a light coming nearer in the midst of darkness. Heesun Kim Oakland, CA. 2014 *Adult mayflies can live few minutes to two days. Despite her pain and discomfort, she still retained her sharp mind and got up every day and walked. She maintained her independence till the week before she died. She was a healer devoted to welfare and comfort of the others to the last moments of her life. Her two grandchildren Julian and Oliver Park became her pleasure and delight as their mother, my sister in law, Natalie Nhu Hoe Park, brought them to see Mother on her birthdays and holidays for the past nine years. They were affectionate and loving and always checking in with Grandma whenever they could. All the family and friends all were able to say Good byes with Mother. Her last words were, “I want to go home.” We are grateful to Noble Hospice for their nurses and the Director for their utmost compassion and expert advice to guide us and Mother in her final process. We are grateful to our friends who kept sending us encouraging and heartfelt messages throughout. I am grateful that I, Nhu Hoe, and the caregivers, Cynthia Desuasido and Gina Galera, were able to keep 24/7 vigil while my husband, Kyu Hyun Kim supported us with food, supplies, and a caring presence for us. Most of all, I am grateful to my husband, Kyu Hyun Kim, who loved Mother and patiently supported me with unconditional love and presence for the past 9 years. Father passed away two years ago. Mother is survived by a daughter, Youngmi Angela Pak, and four sons, Rogner Park, William TS Park, Song Yon Pak, and Demian Park, their spouses, nine grandchildren and seven great grandchildren. We love you Mother!

Heesun Kim (1932-2022) Heesun Kim, my Mother, was born in Seoul, Korea in May 21, 1932 and grew up in one of the most turbulent and difficult times of the Korean history: the Japanese Colonial period, the US Military occupation and the Korean... View Obituary & Service Information

The family of Heesun Kim created this Life Tributes page to make it easy to share your memories.

Send flowers to the Kim family.