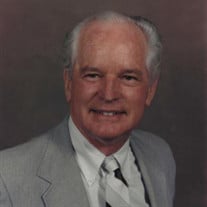 Gordon Laurence Laverty, 31 March 1924 - 15 February 2020 Gordon Laurence Laverty was born on March 31, 1924 in a humble cottage to Laurence and Winifred Laverty of Alameda, California. By age 14, both of his parents had passed away and he relocated to Burlingame, California to live with his great uncle, Arthur “Cy” Ross. There, he attended Burlingame High School, swam on the school’s swim team and took part in student government, including the Junior Statesmen of America. In the Fall of 1942, he began studies at the University of California, Berkeley. During the very first day of school, a young lady named Marjorie Pearson caught his eye and he initiated a conversation that began a relationship lasting for the next 78 years. In early 1943, with World War II raging, Gordon enlisted in the U.S. Army. He was assigned to the 4025th Signal Service Group and deployed to the Pacific Theatre of the war. In the lining of his helmet, as he sailed on a troop ship out of San Francisco Bay for points unknown, was a handkerchief given him by his sweetheart Margie. During his three years of service, he deployed to New Guinea, the Philippines, and Tokyo. As he prepared for his flight from the Philippines to Tokyo, he was on the tarmac with General Douglas MacArthur. His camera at hand, he quickly snapped a photo of the general that today is on permanent exhibition in Washington D.C. Following his discharge from the Army in 1946, Gordon returned to his studies at U.C. Berkeley, going on to earn a degree in Civil Engineering in 1950. That same year, 1950, Gordon accepted a position as Junior Sanitary Engineer at the water utility East Bay Municipal Utility District, based in Oakland, California. A result of his exceptional skills with people, he quickly rose through the managerial ranks of the company. In 1957, Gordon and Margie were married in Palm Springs, California, setting up shop in 1959 in a brand-new home they helped design in Oakland. That same year, the first of three children was born to them. By 1963, their household had grown to include children Laurence, Ross, and Annette Laverty, as well as Margie’s mother Violet Pearson. By the mid-1960’s, East Bay Municipal Utility District had risen to become the most respected large water utility in the world and Gordon was on his way to achieving the company’s #2 position as Assistant General Manager of Operations and Maintenance. Representatives from water utilities around the world traveled to Oakland to learn from Gordon and his team. Gordon retired from East Bay Municipal Utility District in 1984 following 34 years with the company. He then created Laverty Associates, an engineering consulting firm specializing in utility management, planning, and emergency preparedness. He was called upon as an expert witness in numerous court cases involving utilities throughout the United States. He also continued to publish numerous papers in engineering, utility management, and planning, traveling to many of the world’s largest cities to speak on the subjects. During the late 1980’s, he was invited to take a position in the Kingdom of Saudi Arabia to design the water supply system for a brand-new city of several million people but declined the offer in order to remain with his beloved family. Throughout his years with East Bay Municipal Utility District and with Laverty Associates, Gordon remarkably made time to participate in and lead numerous professional and civic organizations. These include: The United States Public Health Service, The American Society of Civil Engineers, The American Water Works Association, the American Academy of Environmental Engineers, the Earthquake Engineering Research Institute, National Coordinating Council for Emergency Management, The State of California Governor’s Earthquake Task Force, The American Legion, The “Fair Haired Boys” of the U.S. Army’s 4025th Signal Service Group, The Oakland Heritage Alliance, Oakland’s Fruitvale Presbyterian Church, Oakland’s Woodminster Summer Musicals, The Redwood Club, the Boy Scouts of America Troop 339 of Oakland, columnist for the MacArthur Metro newspaper, The Leona Heights Improvement Association, Job’s Daughter’s Bethel #222 of Oakland, Alta Bates Hospital Volunteer Corps, the Burlingame High School Reunion Committee, Friends and Family of Nisei Veterans, and he was honored as the first male member of the Ebell Society-Montclair Women’s Club of Oakland. Gordon gave selflessly and tirelessly to everyone he encountered, especially to his family and to members of his extended family in times of need. He added significantly to the genealogical record of the Laverty Family, spending thousands of man hours in libraries and halls of record throughout the United States and Europe. He embraced his family’s deep passion for journalism and literature. Aside from his numerous professional and civic publications, Gordon enjoyed writing poetry. His appetite for reading spanned many subjects but history fascinated him the most. At the time of his blindness, his library encompassed several thousand books. Gordon Laverty was an uncommon man, and always built his strength through Christianity. He was the co-founder of a church in the New Guinea jungle during World War II, went on to become an accomplished Bible scholar, hosted a Christian radio show, and taught Sunday School to dozens of adults and children, including several of Oakland’s challenging “crack babies.” His greatest contributions to the lives of others though came not through teaching, but instead through the infectiously positive way he went about living his life. Gordon passed away February 15, 2020, in his bed, at the home in Oakland that he and his sweetheart Margie had built together, 61 years ago.

The family of Gordon Laverty created this Life Tributes page to make it easy to share your memories.

Send flowers to the Laverty family.