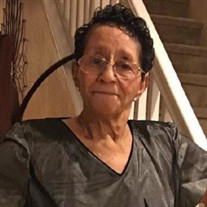 Gloria Jean Nervis was the first child to Charlie Sigman and Gertie Lee Rucker, born on December 26, 1938 in Oak Grove, Louisiana. She confessed Christ as her Savior at Church Street Church of God in Oak Grove, Louisiana where she was baptized. She was a member of Elmhurst Seventh Day Adventist Church and later maintained her membership at New Hope Church of God in Christ under the leadership of Reverend Milton Starks. She departed this life on March 15, 2020 at the age of 81. Gloria graduated from Combs McIntyre High School with honors in Oak Grove, Louisiana. She also attended Laney College in Oakland, California. Gloria met and later married Frank Nervis Jr. on December 25, 1958 and to this union six children were born. Gloria was a Christian that loved the Lord and read the word daily. Frank and Gloria instilled the love for God in their Children and witnessed to others. Gloria was full of life and was committed to the Lord, her husband and her family. During her childrens’ young lives, she was a wife, homemaker, and awesome mother. Gloria began her career with various jobs at Lady Esther’s Restaurant, Oakland Unified School District (Instructional Assistant), Varick Center Christian Academy (Assistant Teacher), Stanford Research Institute (Research Technician), Tymeshare Unitax (Proof Reader of Tax Returns), Gannett Enterprises, and later became an entrepreneur catering weddings and other functions. She began her career with the Internal Revenue Service in 1980 and retired in 2001. During her years of service with the IRS she received the United States Department of Treasury Albert Gallatin Award. Gloria was full of life, she loved her grandchildren and great grandchildren dearly. She loved entertaining and had many talents. Her hobbies included her love for cooking, baking, sewing, and playing the piano and organ. She faced many challenges and conquered them all. She left this world surrounded by love and family, just as she wanted. She is preceded in death by the love of her life Frank Nervis Jr. and her oldest son Ronald Dean Nervis. She is survived by five children: Gerald Nervis (Carolyn), Vivian Renee Nervis-Kuykendall (Ronald), Elizabeth Denise Nervis, Rhonda Faye Roberts (Michael), and Sharon Yvette Nervis-Jones; eighteen grandchildren: Ronald II, ShaRhonda, Ja’Cari, Ronald Dean, Jalisa, Geracar’, Andre, Ranada, Ronda, Dean’A, Ashley, Michael, Malcolm, Martin, Gerald Jr., Aalani, Meeiah Symone, and Marcus; twenty-three great grandchildren; two loving brothers: Charles (Doris) and Calvin (Maxine), and one loving sister: Carol Elizabeth (Joseph); a host of nieces, nephews, and other relatives and friends. She will be deeply missed by all.

The family of Gloria Jean Nervis created this Life Tributes page to make it easy to share your memories.

Gloria Jean Nervis was the first child to Charlie Sigman and...

Send flowers to the Nervis family.