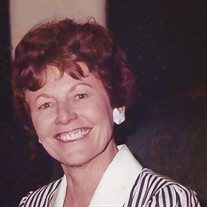 Gloria Frances Chavez, January 6, 1927 – December 2, 2019 Gloria danced away from this life on Monday 12/2/19 eager to be reunited with the love of her life, her husband“Ralphie” who passed away in 2016. Gloria was 92 years young and still the life of the party!Gloria was born in Oakland, CA to Clara and Floyd Faber sharing her childhood with brother Allen. She attended Rockridge Grammar School, Claremont Jr. High and University High School in Oakland and San Francisco Junior College which is now called San Francisco City College. Gloria's closest and dearest friend since junior high school, Gail Morine became her sister-in-law in 1950 after Gloria introduced her to Allen. In 1961, Gloria married Ralph Chavez and spent 55 wonderful years with the man of her dreams. Gloria and Ralphraised their children in the Montclair District of Oakland where they lived until 2016. There was no other place other than Oakland that Gloria ever wanted to call home.For many years, Gloria enjoyed yoga and a brisk daily walk but even more so, shoe shopping! Both Gloria and Ralph enjoyed gardening at their home in the Oakland Hills but only if there wasn't a San Francisco 49er game on! Everyone who knew Gloria knew not to call her right after dinner while she was watching her favorite gameshow, Jeopardy! Over the years, Gloria & Ralph enjoyed many travels together throughout the US and abroad. Many photographs placed meticulously into albums memorialize their love and adventures. Gloria cherished spending time with her many relatives and friends, all of whom have a special place in their heart for her. Summer picnics and holiday gatherings were always something Gloria relished and looked forward to. Perhaps the thing she looked forward to most however was dessert!!! Her words of “there's always room for dessert!” will be forever immortalized by her family.Gloria is survived by her daughter Allison Brown of Boulder Creek, son Gary Brown (Linda) of Redwood City, her former daughter-in-law Michelle Brown of Post Falls ID, grandchildren Christina Poulson (Justin) of San Jose, Ashlee Philippi (Kevin) of Post Falls ID and great-grandsons Joshua Brown and Samuel Philippi of Post Falls, ID. Gloria's much beloved son Curt Chavez preceeded her in death in 1994. On both the Faber and Chavez sides, Gloria was also blessed with 20 nieces and nephews, 33 grand-nieces and grand-nephews and a great-grand-niece. Gloria's family would like to extend a very warm, heartfelt and sincere thank you to the absolutely amazing staff at Kensington Place in Redwood City for the wonderful care she received over the past 3 years. Everyone there treated Gloria like she was their own family and for that, we are eternally grateful. Her happy feet that danced to the music at Kensington Place every afternoon will be fondly missed.Gloria will be inurned and join her husband Ralph in their niche at Chapel of the Chimes in Oakland. A celebration of her life will be held a a future date.Should anyone desire to do so, Gloria's family suggests a donation in her memory to the Alzheimer’s Foundation www.alz.org or your favorite charity.

The family of Gloria Frances Chavez created this Life Tributes page to make it easy to share your memories.

Send flowers to the Chavez family.