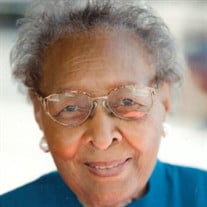 Gladys Louise Tiggs was born on June 18, 1922 to Rubena Marie Patton and Houston Dewey Tiggs in​ Parson, KS. She married Coy Odel Lindsey in 1939​ in Atchinson, KS. Coy and Gladys came to California​ in 1943 where she had her first California job at​ the Fresno, CA Army Base. The Lindsey family​ transferred to Sacramento California where she worked​ for the Sacramento Army Base while her husband​ continued to serve in the military.​ ​ In 1946 Coy and Gladys finally settled in Berkeley, CA​ where Coy worked for EBMUD and Gladys attended​ Berkeley Adult School. In 1960 Gladys Lindsey gave​ birth to twin girls April and Robyn Lindsey. Gladys​ later started working at Central Valley Bank​ (Bank of the West) where she held several positions.​ She retired as a Bank Manager in 1986.​ Gladys also served on the Williams Chaple/Brookins AME​ Church Finance Committee for over 30 years. She also​ served as a Trustee appointed under retired Presiding​ Elder Ezekiel Habersham in the early 1970’s.​ Gladys Lindsey worked and attended school while raising two children in her early years. She was a​ go-getter, business woman, and God fearing woman determined to make a good life for herself and her​ children. She received her certificate of achievement from East Bay Skills Center’s Clerk General Office​ Program. Shortly after, she began working as a teller at Central Valley Bank; now known as Bank of​ the West. She held many positions while working at the bank, alongside helping many young women​ land jobs at the bank and grow into successful business women. Many years later she retired from the​ bank as the Operations Manager out of the Lakeshore Ave. branch in Oakland, CA. During her time at​ the bank, she built long lasting relationships with her customer’s creating strong friendship ties that​ carried into her late years. Amongst her career accomplishments, Gladys became a strong pillar in her​ church community, working with the committee to create the vision for Brookins AME Church in​ Oakland, CA. She served on the committee helping build the church from the ground up. She also​ served as a long term Treasurer and Trustee. You could always find Sister Lindsey around the church,​ either starting her Sunday mornings at Sunday School, Sunday church service, and participating in​ other God seeking activities throughout the week. Gladys was more than a faithful church member.​ Her genuine spirit impacted many around her and changed lives. “She was like EF Hutton. When she​ spoke, you listened.”​ Gladys was a loving mother of twin girls; April Gause and Robyn Lindsey, and a caring grandmother​ to: Joshua Gause, William Robinson, and Khadijah Robinson, who all currently live in the Bay Area.​ Gladys spent her later years caring for her grandchildren, nephews, and a family friend from birth to​ grade school. Gladys Lindsey survived her sister Dorothy Tiggs, brother Houston Tiggs, sister-in-law​ Ethel Tiggs, and brother Robert Tiggs. Other family members, but are not limited to, her nieces,​ Barbara Euell, Janice Flemons, Joanna Chavis, and nephew Michael Tiggs; as well as a host of other relatives and friends To ensure the health and safety of our community, we are following all guidelines set by local, state and CDC officials. If you are planning on attending a service, please contact the funeral home in advance, so that we can plan accordingly.

The family of Gladys Lindsey created this Life Tributes page to make it easy to share your memories.

Send flowers to the Lindsey family.