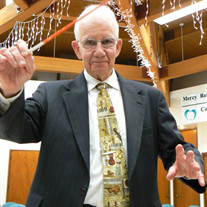 Gilbert Howe Gleason III: August 17, 1932 - January 28, 2021 Gil Gleason passed away peacefully in his sleep January 28, 2021 at home in Orinda, California. He is survived by his wife of 54 years Karen Johnson Gleason, his sister Audrey Bohannon of Orangevale, CA, daughter Bonnie Siegner of Star, Idaho, son Stefan Gleason of Charlotte, North Carolina, son Michael Gleason of Boise, Idaho, 5 grandchildren, son-in-law Clint Siegner, daughters-in-law Tanya Gleason and Jenn Gleason, niece Sally Lane, and nephews Richard Bohannon and Jim Bohannon. Gil was born in Elizabeth, New Jersey to Anthony Howe Gleason and Thelma Brehm Gleason and grew up in the town of Westfield, New Jersey. Music became part of his life at an early age beginning with private violin lessons at age 8. He excelled on the instrument, won auditions to New Jersey All State Orchestra, and was fortunate enough to attend Interlochen National Music Camp for two summers. Gil didn’t find his chosen musical career until his early 30s. His father, knowing how difficult it would be to make a living with music, pushed him in the direction of chemical engineering, which didn’t “take”. Gil flunked out of Cornell University after one year there and began working. The US Army drafted him, and after three years stateside service during the Korean War, Gil continued his college career at Oberlin College and obtained a BA degree in philosophy in 1958. Following Gil’s move from Ohio to the Bay Area in California in 1960, Gil played his violin in church and elsewhere, and people began to encourage him to get serious about music. He finally took the tenuous leap in 1963, committing himself to marathon practice sessions, private lessons, playing in several local and church orchestras, and entering auditions. He won a spot in the second violin section of the professional Oakland Symphony and finally got paid to play his violin in 1964 at age 32. He held this Symphony post for 35 years. Just at the time when Gil decided to give music a try, he met his future wife of 54 years. In 1963, Karen Johnson was a fourth-year physiology major at Cal Berkeley and was playing her violin in the First Presbyterian Church orchestra when Gil joined up. The same day he met Karen at a rehearsal, he also “snagged” his first violin pupil, a 70-yearold lady. So began Gil’s extremely rewarding career of teaching violin to hundreds of children and adults that spanned more than 50 years. When a position came open for a directorship of a small instrumental ensemble sponsored by Oakland’s Department of Parks and Recreation, Gil was encouraged to apply even though he had never held a baton. He quickly engaged his good friend and fellow tennis-player Madi Bacon to give him some conducting lessons. There were no other applicants, so when hired, Gil began a 50-year musical career as conductor of the Oakland Community Orchestra (OCO), which over time grew to over 50 amateur musicians. The group rehearses weekly and performs for senior homes, Oakland schools, and the public. Karen entered the picture again in 1965 when Gil recruited her to play violin in the fledgling OCO and gave her a ride to rehearsals. They were married in October 1966 and made their home in a Berkeley flat that doubled as a music studio. Gil’s teaching reputation grew, and he was quite busy giving as many as 25 private lessons each week, playing in the Oakland Symphony and conducting two groups, the Oakland Community Ensemble the OCO, both sponsored by Oakland Parks and Recreation. Later the two groups merge into one. After moving from Berkeley to buy their first home in Orinda in 1969, Gil and Karen became parents and hosted musicales, student ensembles and recitals in their newly built music room addition. Their children Bonnie, Stefan, and Michael, born in the 70’s, added their boundless energy to the Orinda household that doubled as a music studio, rehearsal space and recital hall. Gil continued juggling the conducting, violin playing and teaching hats, with additional “gigs” including the Stockton Symphony that required a long commute to rehearsals and concerts. It was hard to keep the calendar straight but all the musical efforts were deeply satisfying, especially playing his violin in church at St. Stephen’s Episcopal Church and St. John’s Episcopal in Oakland. When the children left home to go to college, Gil and Karen began to get involved in Uganda. They began by sponsoring orphans for their education through their church St. John’s in Oakland. In 2001 they made a trip to meet their sponsored children and were joined by the rector Rev. Scott Denman and three other parishioners. The experience was life changing for Gil and Karen and spawned greater and greater involvement over the years and more trips there. In 2004, Gil and Karen founded the Friends of Ruwenzori Foundation to support a Ugandan grass-roots charity that was (and still is) making a valiant effort to fight AIDS and poverty in the rural foothills of Western Uganda’s Ruwenzori Mountains. Many Bay Area people volunteered, raised and gave funds, including many St. John’s parishioners. The growing financial support enabled the Ugandans to build and operate a clinic and hospital, vocational school, microfinance and health insurance programs, village health teams, and school fees are paid for vulnerable children. A celebration of Gil’s life will take place in the future when it is safe to gather in community at St. John’s Episcopal Church, 1710 Gouldin Rd, Oakland, CA 94611.

The family of Gilbert Gleason created this Life Tributes page to make it easy to share your memories.

Send flowers to the Gleason family.