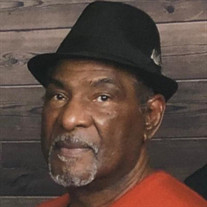 Geary Bernard Johnson passed away on May 5, 2020, at the young age of 67. He was born on May 13th in 1952, in Pittsburg, California, the son of Gilbert Johnson and Helen K. (Peppers) Johnson. Geary spent his younger life in West Oakland and Berkeley, California. Geary attended El Cerrito High school, and continued his education at Gavlin and Chabot college and later received a Certificate of Carpentry from Laney College. He was married to Wanda (Turner) Johnson on October 20, 1979. Of this union, they created a beautiful family consisting of 3 children. Geary worked many fascinating and creative jobs. Such as Glassblowing at the Berkeley Glass Lab. Making Chocolate bars and malt balls., he was known as the ‘Candy man’ from his days at the Richmond Candy Factory. But he returned to his passion in construction with BBI, Berkeley Builders Incorporated. He transcended his skills in carpentry and woodwork with making musical instruments, home improvements and cabinet making. His creativity was also shown through his designs in glass blowing and music. He was a self-taught musician who played a variety of instruments and also specialized in analog production. Everyone that knows him saw his special bond with animals, that he could easily be coined the “animal whisperer”. To many, Geary would be described as quiet and reserved, but to close family and friends, Geary was known to have a unique sense of humor. Geary enjoyed cooking creative dishes and was a master craftsman with a keen eye for restoration and repurposing. Later in his life, Geary’s creativity expanded to gardening and spending time with his grandchildren. Geary was preceded in death by his parents, Gilbert & Helen Johnson, his twin brother, and sister Sharon Diane Johnson. He leaves to mourn his wife of 40 years, Wanda, his children Geary II, Amanda, Michael, his grandchildren Jayden Stenschke, Jarren Johnson, and Kennedy Stanley, his brother Arnold Christain and a host of family and friends that will miss him dearly.

Geary Bernard Johnson passed away on May 5, 2020, at the young age of 67. He was born on May 13th in 1952, in Pittsburg, California, the son of Gilbert Johnson and Helen K. (Peppers) Johnson. Geary spent his younger life in West Oakland and... View Obituary & Service Information

The family of Geary Johnson created this Life Tributes page to make it easy to share your memories.

Send flowers to the Johnson family.