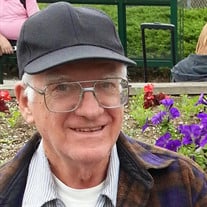 Frankland Michael Banks, 81, of Oakland, passed away of natural causes on January 8, 2020. Frank was born in San Francisco on February 6, 1938. Early in his youth, his family relocated to Citrus Heights, CA. Frank graduated from Christian Brothers High School in 1956. After high school, Frank worked on an oil freighter. He enjoyed the work and traveled from Alaska up and down the west coast. Frank joined the US Army where he proudly served from 1961-1964. While assigned in the Philippines he met the love of his life, Pacita Gilbert. Frank was married to Pacita on August 19, 1962. Frank was a lab technician working primarily in the refinery industry. He worked for Shell and Chevron. Frank was a life-long learner. He went to evening classes at Laney and Merritt Colleges as well St. Mary’s University. He had a passion for books and information and took great joy in finding and collecting interesting books and articles. Frank was proceeded in death by his parents, Michael and Velma; his wife, Pacita, and his son, Frankland Jr., and his daughter, Mercy Josephine. He is survived by his daughters, Jeanie (Banks) Mazariegos, Jessica (Banks) Baird, and Pacita Banks; grandchildren, Maria Mazariegos, Brenda (Mazariegos) Duran, and Andrea Mazariegos; Rebecca, Mitchell, Elizabeth, and John Baird; and Te’Raya and Tania Carter; great grandchildren, Lily Walker and Sierra Duran, William Mazariegos-McBroom, and Wyatt Grant; and brothers, Stephen and Joseph Banks. Funeral arrangements will be held at 3:00 pm on January 16, 2020 at Chapel of the Chimes. In lieu of flowers, family has requested donations be made in honor of Frank to the National Kidney Foundation.

Frankland Michael Banks, 81, of Oakland, passed away of natural causes on January 8, 2020. Frank was born in San Francisco on February 6, 1938. Early in his youth, his family relocated to Citrus Heights, CA. Frank graduated from Christian... View Obituary & Service Information

The family of Frankland Banks created this Life Tributes page to make it easy to share your memories.

Frankland Michael Banks, 81, of Oakland, passed away of natural...

Send flowers to the Banks family.