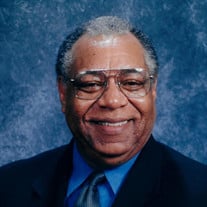 After challenging health issues, Frank Davis made his transitions o January 31, 2021. Service for Frank Davis will be held o February 26, 2021 at 12:00 pm at The Chapel of the Chimes, 4499 Piedmont Avenue, Oakland, CA 94611. Viewing will be held from 11:00 am – 12:00 pm. Frank Davis (August 9, 1938 –January 31, 2021), born in Junction City, Arkansas, lived in Cleveland, Ohio prior to his move to Oakland, California in 1968 with his wife Myrtis. In 1972, they welcomed a son, Christopher. Frank received a Masters Degree from San Francisco State University and worked in his passion: education and Job and Career placement until his retirement. Frank, an Army Veteran, a member of Allen Temple Baptist Church, a member of the Phi Beta Sigma, and a member of the Kiwanis Club is survived by his wife Myrtis, his son Christopher, and his two Grandsons, Omari and Jesai. Those who knew him will surely miss him.

The family of Frank Davis created this Life Tributes page to make it easy to share your memories.

After challenging health issues, Frank Davis made his transitions...