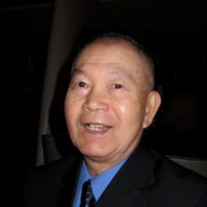 On Saturday, June 8, 2019, Frank C. Chan of Oakland, California, loving husband and father of four children, passed away peacefully with the Lord at the age of 82 years. Frank was born on September 16, 1936 in Toishan, China to Chan Leung and Shew Kam Chan. He immigrated to Oakland at the age of 16 and graduated from Oakland Technical High School. After taking vocational training courses at Laney Community College and an apprenticeship opportunity, Frank became a machinist. On March 25, 1967, he married Mary Chan in San Francisco. They raised four children: Melinda, Vivian, Shel, and Cindy and spent 52 wonderful years of marriage together. Frank built a successful 25+ year career as a machinist in the private industry and in later years, with the US Navy, designing and repairing intricate engine parts for Naval aircrafts. Frank had a passion for working with his hands. He was skilled in auto mechanics, electronics, home maintenance, and cooking. He was also an ambitious restaurateur, having operated one of the first fusion restaurants in San Leandro, California. Frank had a keen interest in sports and was an avid bowler, as well as an enthusiastic fan in supporting the local baseball, basketball, and football teams. During the past two decades, he enjoyed traveling internationally with his family. He cherished spending time with them and it showed with his infectious smile. Frank was preceded in death by his father, mother, brothers, and sister. He is survived by his wife Mary, his four children, Melinda, Vivian, Shel and Cindy, his cousins, nieces, and nephews. Frank was an honest, loving, faithful, and hardworking husband and father. He was known for his kind and compassionate spirit. He will be deeply loved, missed, and remembered in our thoughts and hearts forever. In lieu of flowers, donations may be made in memory of Frank’s name to the Alta Bates Summit Brain Injury Services Fund. For more info, please contact Mary Loura Garcia at510-204-2956 or [email protected]

On Saturday, June 8, 2019, Frank C. Chan of Oakland, California, loving husband and father of four children, passed away peacefully with the Lord at the age of 82 years. Frank was born on September 16, 1936 in Toishan, China to Chan Leung and... View Obituary & Service Information

The family of Frank Chan created this Life Tributes page to make it easy to share your memories.

Send flowers to the Chan family.