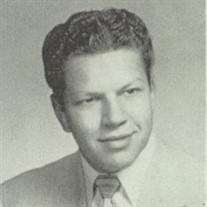 Frank Vincent Butorovich born September 15, 1936, deceased June 20, 2021. Frank was 84 years old when he passed away due to complications from cancer. Frank was born in Oakland California, moved to Modesto for a time and then returned to Oakland where he met and married Bonnie Louise Sawdon on September 3, 1955. Frank was always interested in cars and started working with repair shops when he was 16 as a tow truck driver. Frank later began doing body and fender repair which he continued to do even beyond his retirement at age 65. After his retirement, Frank became the "resident mechanic" and many friends and family relied on him for advice and repair work up until just a couple of months before he passed. Frank loved the outdoors and had a passion for camping and flyfishing. He even liked to tie his own flies. One of his favorite places to fish in his later years was on the Comstock Ranch. Family vacations always consisted of camping and climbing rocks and floating down the river for the kids, fishing for Dad and some peace and quiet back in the campground for Mom. Frank had a reputation for the most immaculate yard in the neighborhood and he always took great pride in his yard even up until last summer. Frank was preceded in death by his wife Bonnie, survived by his brother, Wayne Butler (Eileen), sister, Charmaine Murphy (Brent), children, David Butorovich, Susan Hawkins, Joanne Jones (Jeff). He had 8 Grandchildren, Christopher Bergloff (Carrie), Stephanie Meagher (Kevin), Melanie Bergloff, Thomas Bergloff, Nicholas Bergloff, Brittney Long (Daniel), Brooklynn Ross (Blake), Brylee Stone. Frank also had 10 great grandchildren, Chloe Bergloff, Cullen Bergloff, Colette Bergloff, Castin Bergloff, Myles Meagher, Brody Meagher, Ariel Bergloff, Lilly Bergloff, Juliette Long, Elias Long.

Frank Vincent Butorovich born September 15, 1936, deceased June 20, 2021. Frank was 84 years old when he passed away due to complications from cancer. Frank was born in Oakland California, moved to Modesto for a time and then returned to Oakland... View Obituary & Service Information

The family of Frank Vincent Butorovich created this Life Tributes page to make it easy to share your memories.

Send flowers to the Butorovich family.