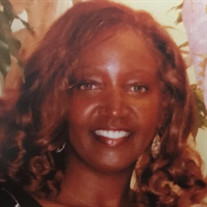 Felicia Laura Collier was born on February 14 (Valentine’s Day), 1960 in West Germany to her loving parents Edgar and Laura Collier. Her father was a member of the United States Army and her parents were stationed in West Germany at the time of her birth. After her parents returned to Oakland, California, just before her second birthday, she became the “big sister” to Cornelia, a title she wore proudly for the remainder of her life. Felicia excelled as a young child and was even skipped from third to the fourth grade while attending Burckhalter Elementary School in Oakland. She attending King Estates Jr. High and graduated from Skyline High School in 1977. During her junior year at California State University, Hayward, she married John W. Thompson, Jr who played for the NFL Green Bay Packers. After two years of marriage they divorced and Felicia returned to Oakland determined to provide nicely for herself and worked two full time jobs at the United States Post Office and East Bay Municipal Utility District (EBMUD) for sixteen years. After becoming an advanced plumber for EBMUD, she left the Post Office and worked solely for EBMUD. She ended her career after working there for twenty- seven years. However, her proudest accomplishment was being able to buy a beautiful home in the Oakland Hills and take her mother on several nice vacations to the Caribbean, Hawaii, Mexico, the Wine Country, and to visit the Gilliam Cousins in New Waverly, Texas. Felicia was also a fashion model and enjoyed shopping for unique clothing and decorative objects for her home. Throughout her life, Felicia was always the loving big sister. Growing up, she and her sister were best friends and enjoyed going to parties and outings together. When her little sister began college and moved into the dorms, Felicia bought her the best comforter set with matching wall hangings making her the envy of the dorm. When her little sister played tennis, she surprised her on Christmas morning with the best tennis racket available at the time. She always looked out for her. They had a special sister bond that stood the test of time. Felicia, known as Aunt Felicia, enjoyed spending time with her niece and nephews. She did not have children but was the fun Auntie as she let them eat candy, hot Cheetos, beef jerky, soda and play with water and nerf guns. She even bought them a Play Station 2 when their parents refused to get it for them. She kept it at her house as a secret and they would play whenever they went over. She would take her niece on shopping sprees just because and bought too many clothes. She was that Auntie. Felicia was also the proud owner of Lucy, a little dachshund dog who she loved and adored. We learned that Felicia Laura Collier departed this earthly life and became our ancestor on October 3, 2020. She was preceded in death by her mother, Laura Bernadine Collier (2011). She leaves to cherish her memories, her father, Edgar Lawrence Collier, her sister Zarina Cornelia Ahmad, her brother- in -law Mubarak Ahmad, her niece Iminah Ahmad, her nephews, Ayinde Ahmad (wife Nicole), Azeem Ahmad (fiancé Sierra), Akintunde Ahmad all of Oakland, California and a host of great nieces, great nephews, cousins and friends. To ensure the health and safety of our community, we are following all guidelines set by local, state and CDC officials. If you are planning on attending a service, please contact the funeral home in advance, so that we can plan accordingly. Please join us remotely for the services. See live stream link below. https://viewneral.zoom.us/j/91621252326?pwd=cjNaS2Nxd0IzQjJWZXVLWkljSitLUT09

Felicia Laura Collier was born on February 14 (Valentine&#8217;s Day), 1960 in West Germany to her loving parents Edgar and Laura Collier. Her father was a member of the United States Army and her parents were stationed in West Germany at the... View Obituary & Service Information

The family of Felicia L. Collier created this Life Tributes page to make it easy to share your memories.

Send flowers to the Collier family.