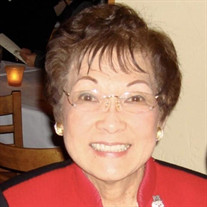 Etsuko Betty Aikawa was born in Oakland to Senzo and Takayo of Tottori-ken, Japan. She passed away peacefully surrounded by her loved ones on July 10, 2021 at the age of 96. When Etsuko was eleven years old she met Larry Aikawa and years later was his senior prom date. Larry began his studies at UC Berkeley while she was still a student at Oakland High. During World War II their families were sent to different relocation camps. Etsuko and her parents returned to Oakland after their release from camp while Larry served in the US Army. Upon his discharge Larry and Etsuko were reunited in Oakland and were soon married. Larry completed his studies at UC Berkeley and then entered UC San Francisco School of Dentistry. During this period Etsuko was employed with the VA as an insurance examiner to help support the growing family with the addition of three sons. After Larry began his dental practice in San Leandro Etsuko stayed at home to raise the family. She was a busy mother taking care of the household and her mother while being involved in her sons’ schools and activities, the Buddhist Church of Oakland, and the dental wives auxiliary. After her sons were grown Etsuko worked with Larry at his dental office utilizing her clerical and insurance skills along with her endearing personality until his retirement in 1991. Etsuko learned to be an excellent cook and would enjoy entertaining at home with her delicious meals. She and Larry enjoyed socializing with their many friends and relatives, theater, dance classes, traveling, weekends in Carmel and shopping for antiques, art and koi. After Larry passed Etsuko was determined to remain healthy in order to watch her three granddaughters grow up. In spite of major injuries and illnesses she always recovered so that she could continue to provide her family with limitless love. Etsuko was always beautiful, elegant and sweet but revealed an inner strength and courage to survive all hardships. She persevered over 27 years without Larry by her side so that she could see her granddaughters become successful adults and was even able to enjoy three great grandchildren. Etsuko leaves behind a large circle of family and friends who were touched by her unique way of demonstrating love and care for them and she will be missed greatly. She is once again with the love of her life Larry and they can now be together forever. Etsuko is survived by her 3 sons Randy (Roxanne), Alan (Jody) and Gary, 3 nieces Hiroko Moriwaki (Yoshiharu), Penny Buck and Sherry Burton, 3 granddaughters Kaileen Glass, Rikki Aikawa-Santos and Reanne Aikawa, 3 great grandchildren Kaiya Santos, Kaden Santos and Evelyn Glass, and 12 nieces and nephews. She was preceded in death by her husband Larry Aikawa, her parents and her sister Michiko Tanaka. A service for her family will be held at the Chapel of the Chimes.

Etsuko Betty Aikawa was born in Oakland to Senzo and Takayo of Tottori-ken, Japan. She passed away peacefully surrounded by her loved ones on July 10, 2021 at the age of 96. When Etsuko was eleven years old she met Larry Aikawa and years later... View Obituary & Service Information

The family of Etsuko Betty Aikawa created this Life Tributes page to make it easy to share your memories.

Etsuko Betty Aikawa was born in Oakland to Senzo and Takayo of...

Send flowers to the Aikawa family.