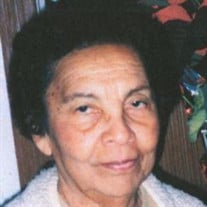 Esmeralda Abelina Grant, a retired nurse practitioner, passed away peacefully at her home at the age of 100 on June 27, 2021. She was born on June 4, 1921 in Tela, Honduras, to her father Jocobo Procopio Bonilla, a Doctor and Human Rights Judge, and her mother Estefana Fernandez, a homemaker from El Salvador. When Esmeralda was only 3 years old her mother Estefana became sick from tuberculosis and passed away as a result. Since her father was a judge he was able to lawfully claim Esmeralda as a dependent despite the fact that he was not married to her mother. He raised Esmeralda along with her other half brothers and sisters as a single parent. As a young child Esmeralda watched her father transform his home into a clinic so he could treat patients free of charge who were too poor to pay for medical treatment. However by age 11 Esmeralda became an orphan after her father was assassinated due to his protest against the Government. Even in the face of adversity Esmeralda persistently worked in other peoples’ homes to support herself once she became an orphan. At the age of 20 she married Franklin Grant who was studying to be a medical statistician. The couple bore two children, Barbara Cristina Grant-Tengeri and Robert Franklin Grant Sr. Soon after their marriage Esmeralda landed her first job as a nurse’s aide at the United Fruit Company in Tela, Honduras. While working at the local hospital Esmeralda came to the attention of an American supervising nurse who graduated from Bellevue School of Nursing in the United States. She was impressed with her nursing skills and saw how fast she caught on. The supervising nurse convinced Esmeralda to apply to Bellevue School of Nursing and to see what type of support the school staff/administration could provide to assist Esmeralda. However, Bellevue could not accept Esmeralda’s application since she did not have a high school diploma. Eventually, the visiting Minister from Chambersburg, supervising nurse, a doctor and her husband found a family in Chambersburg who decided to welcome Esmeralda into their home, while she pursued her high school diploma. Afterwards, she went to New York to be trained as a nurse at the Bellevue School of Nursing while she attended Hunter College at night. Even though she endured family separation, economic hardship and a divorce, she graduated with honors. In 1967 she moved to California and went through training at Kaiser Hospital to become a nurse practitioner.Esmeralda later became a Director of Nursing at Matilda Brown Convalescent Home and Mc Clure Convalescent Hospital in Oakland. She retired after that and enjoyed spending her time reading, traveling, and attending baseball games. She also enjoyed working as a volunteer at the Downtown Oakland Senior Center for over 25 years. She particularly enjoyed spending time with her dear friend and soulmate Dennis Mishek who was her companion for over 47 years. Even with her advanced arthritis, she maintained an active schedule and didn’t spend time worrying about unimportant things. Maybe this was the secret to her longevity. She leaves behind her son Robert Sr., daughter Barbara, granddaughter Adebisi Akinrimisi, two Grandsons Onsomu Tengeri and Robert Jr., one Great Grandson Muroki Sokoro Tengeri, and many more dear and valued family members and friends.

Esmeralda Abelina Grant, a retired nurse practitioner, passed away peacefully at her home at the age of 100 on June 27, 2021. She was born on June 4, 1921 in Tela, Honduras, to her father Jocobo Procopio Bonilla,... View Obituary & Service Information

The family of Esmeralda Abelina Grant created this Life Tributes page to make it easy to share your memories.

Send flowers to the Grant family.