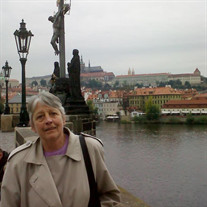 Diana Lee Smith passed away on Friday, June 11th in Berkeley, California at the age of 75. She was surrounded by her beloved family, just as she lived her life. Diana is survived by her husband, Tomas Frank; daughters Marie Jones (Jason) and Carla Spain (Christopher); grandchildren Sydny, William, Aiden, Elizabeth, and Thomas; brothers William Smith (Patricia) and Steven Smith (Julie); and sister Tracy Amelio (Joseph); in addition to many nephews, nieces, and cousins. Diana was born in West Orange, New Jersey, the eldest of four children. She attended Morristown High School before moving to Washington D.C. to attend American University. She completed her bachelor’s degree in Speech Arts in three years, graduating in 1967 and moving to New York City. It was there that she met her future husband Tomas, a recent immigrant from Czechoslovakia. In 1972, the couple moved to Berkeley where they settled and raised a family. Diana pursued a career as a costume designer, working at several regional theaters, including Berkeley Repertory Theatre. She left her theatrical career after having her daughters, though creative endeavors remained central to her life. She began a second career as a budget analyst at the UC Berkeley Graduate School of Education, where she spent more than 20 years, retiring in 2014. A devoted student of the world, Diana regularly engaged in continuing education, with interest areas as varied as accounting and folklore. She devoted much of her free time to volunteering, including costume design for Berkeley Ballet Theater and other performing arts activities with her children, and serving as treasurer for several organizations, including Berkeley High Crew. Diana loved travel, the arts, and supporting charities, both local and national, in her efforts to make the world a better place. While she could be soft-spoken and preferred to observe rather than be the center of attention, her intelligence, capacity to listen deeply, and witty observations ensured her loved ones would flock to her as a prized confidant and treasure her thoughts and feedback. Diana led with love, forming deep and lasting bonds with family and friends. Her family invites you to mourn this remarkable woman with them by donating to a charity of your choice in her memory.

Diana Lee Smith passed away on Friday, June 11th in Berkeley, California at the age of 75. She was surrounded by her beloved family, just as she lived her life. Diana is survived by her husband, Tomas Frank; daughters Marie Jones (Jason) and... View Obituary & Service Information

The family of Diana Lee Smith created this Life Tributes page to make it easy to share your memories.

Send flowers to the Smith family.