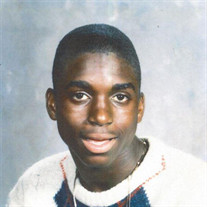 Deon Leamonte Sapp was born August 14, 1972 to Leon Sapp and Katherine Badger-Sapp. This sandy red-haired baby boy was surrounded by love and enjoyed being a part of a big family. He was sort of shy as a child but, he didn't stay that way for long. He broke out of his shell and has been extraverted ever since. Our beloved "D" (as he is affectionately known by those close to him) attended a variety of schools in Oakland, CA including but not limited to Bret Hart Junior High and Fremont High School. D was very athletic. He loved to play baseball and football. He was a great spectator and commentator of all sports. We knew it was going to be animated once the game was on- any game. D went on to attend the Job Corp in San Luis Obispo. After learning the trades he went on to perform a variety of jobs. His work ethic was outstanding. He would show up early and give it all he had. He loved God and was a member of St. Andrews Missionary Baptist Church. Growing up D loved to perform for us. From singing songs by the band Confunkshun, to acting out movie scenes, he kept us entertained. He loved his family and no matter where he was he would always contact loved ones on holidays and special occasions. We never had to wonder with D, we knew he loved us. His laugh was full joy and even if you didn't think what he was laughing at was funny, you took joy in seeing him laugh. He was a free spirit and he always did things his way. Deon was a caring and compassionate man. Deon was preceded in death by both paternal and maternal grandparents; his father Leon Sapp; his aunt Linda Cole; uncle Roosevelt Slater, uncle Robert, "Butch" Cole; aunt Evelyn Bacon; Melrose Jackson (Joe Jackson); Felton Slater. Roosevelt Slater; James T. Slater (Molly); Flossie Norman (Paul); Moses J Badger (Norma); Gloria Badger; and a very special cousin: Tangelia Lynese Badger (BIG SISTER). He leaves to cherish his memories to his loving mother Katherine Badger-Sapp, his children Shaqueri Sapp, Tyree Sapp and his granddaughter Justice Taylor-Wilson and his girlfriend Juanita Dixon. He also leaves behind aunts and uncles: Elton Sapp (Sandra) of Prairie View Texas, Lorain Sapp and Derrian Sapp (Whitney) of Colfax, LA; Willie Jean Sapp (Nina) of Lafayette, LA; Sarah Williams of Newark, NJ; Ernest R. Badger of Daly City, CA; Willie Badger of Sacramento, CA; Ernestine Badger of Oakland, CA; Annie G Badger, Jenel Hayward (Roy) of Claxton, GA along with a host of many, many cousins and friends whom treated like siblings. He did it his way!

Deon Leamonte Sapp was born August 14, 1972 to Leon Sapp and Katherine Badger-Sapp. This sandy red-haired baby boy was surrounded by love and enjoyed being a part of a big family. He was sort of shy as a child but, he didn't stay that way for... View Obituary & Service Information

The family of Deon Leamonte Sapp created this Life Tributes page to make it easy to share your memories.

Send flowers to the Sapp family.