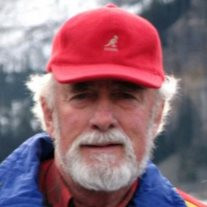 David Hamilton Scott (25 February1942 to 24 December 2016) David entered the world at Queen Victoria Hospital in Montreal on a snowy winter day in February 1942, the son of Eleanor Crossman Scott and J. Murray Scott MD. His adventure on earth ended suddenly when he died unexpectedly on December 24, 2016 as he was preparing to visit his family for Christmas. A tall man with a neatly trimmed silver beard, soft baritone voice, great laugh and kind eyes, he was often mistaken for Santa Claus. With a lifelong love of adventure, make-believe, music, boats and being outdoors, David’s adventures began with an idyllic childhood in suburban Westchester County, NY and continued on an old farm in Bucks County, PA. After the death of his beloved father in 1950, David traveled to California on Route 66 in the family’s woody station wagon–first to Burbank (just blocks from NBC and the Disney Studios) and then the Bay Area where he graduated from Camden High School in San Jose in 1959. Eager to explore the world, David enlisted in the US Navy at age 17, earning the Spirit of Honor medal and other awards at boot camp before becoming a submariner on the USS Caiman, which traveled to ports in the Pacific where he fell in love with Japan. After the Navy, David attended UC Berkeley during the exciting and music-filled 1960s, earning an AB in 1968. He worked in construction on campus in Berkeley so that he could stay in the Bay Area music/art scene, then traveled awhile vagabond style before joining Jorgensen Steel as a truck driver until his retirement in 2006. He enjoyed his retirement to the fullest measure. David became a man with varied interests and passions, in particular music, world travel, sailing, history, learning and new adventures. He was happiest when he could combine more than one interest at a time, especially if it was outdoors. He would dress in costume at the drop of a hat to attend Renaissance Faires, the Dickens Christmas Fairs and Gatsby Picnics. His varied musical interests included singing (high school choir and UC Berkeley Men’s Glee Club) and teaching himself to play just about any instrument he came across, including the keyboard and a variety of fretted and percussion instruments, as well as more exotic instruments like the bagpipes and Cajun accordion. He put all of these talents to use in regular sing-alongs with friends, and even won acclaim in a Veterans Administration band competition. In retirement David loved planning travel itineraries centered on his attendance at USS Caiman reunions, crewing on sailboats with friends on runs to Mexico and Hawaii, world travel, and going with his family on frequent visits to Disneyland and Disney World. David was predeceased by father James Murray Scott, mother Eleanor Vandervoort, and stepfather Robert Vandervoort. He is survived by the matriarch of the family, Aunt Martha Griffith, sisters Penny Proudfoot (Douglas), Peggy Walt (Bill), Linda Scott and Gloria Scott; brother John Vandervoort (Elena), numerous nieces, nephews and grand-nieces, in particular niece Savannah Scott and grand-niece Beatrice Nunes, cousins, and a multitude of friends. We will remember David for his many talents, tales, tolerance; his silliness, sense of humor, playfulness and parties; his sense of adventure, love of history and helpfulness; and, most of all, his big heart. David’s friends and family are invited to share in a celebration of his life on Saturday, February 25, 2017 (his 75th birthday) from 2:00 to 4:00 pm in the Chimes Chapel at the Chapel of the Chimes, 4499 Piedmont Avenue, Oakland, California.

The family of David Hamilton Scott created this Life Tributes page to make it easy to share your memories.