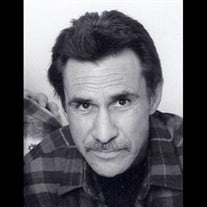 Corey John passed quietly in his sleep in the early afternoon September 16, 2021. He had received excellent round the clock care by his wife and daughter at home for the last several months. He was 74. A native of Oakland, California Corey was born during the postwar years to an Italian-American Catholic family. He was a middle child out of 5 siblings and named after his Italian Uncle Corrado, on his father’s side. He is predeceased by his loving parents, Mario and Louise Tridente and Mother-in law Marge Bugnatto. He is survived by his devoted wife Madeline and loving daughter, Corrie, his 3 brothers; Sam from Anderson, CA Frank from Oakland, CA, Joey (Dino) from Seattle WA and younger sister Claire (Russ) from Santa Rosa, CA. There are also numerous nieces, nephews and great nieces and nephews from CA, Oregon and Florida. In his early years Corey grew to love jazz, playing both the clarinet and Saxophone in school and private lessons along with his brothers. He later was in various bands and played locally in some bay area night clubs. Corey always talked about playing in this group or that group. He said he auditioned for Gabor Szabo at least once (hoping to get a permanent gig.) Unfortunately he didn’t get his big break. Raised in the same home until his teen years in north Oakland, all 5 kids attended the same schools; Peralta, Claremont Jr High and Oakland Tech, with the exception of his sister who went to HS in Livermore. Typical and simpler lifestyle in the 50’s Corey and his brothers played after school sports, farm life in the summers, cops and robbers, cowboys and Indians, hide and seek, bicycles, going to the movies, and playing ball in the middle of the street. And in the evening there were always good and more than enough homemade Italian meals where everyone sat around the table including any friends who might stop by (which was often.) Conversation was always pretty loud as in most Italians families and usually talked over each other...but it was most amusing and fun! In the late 60’s during the era of the Vietnam War, Corey volunteered for the Draft to serve his country. He spent 2 long agonizing years (for our mother) in Vietnam and happily arrived home safely. For years, per Corey, he had denied any introspection of PTSD. He never talked much of his time spent there. He always put up a front when his team of VA clinicians would venture in that direction. When he left the Army, the normal exit exam was bypassed (now required). “I just wanted out. I refused the several hours of debriefing and examination.” The exit exam might have uncovered and made the PTSD diagnosis much earlier. So many dischargees were not properly diagnosed. This all came out years later. With PTSD diagnosed along with bouts of Depression, many more benefits were available to these veterans. Corey was an advocate for these veterans and helped many brothers get their diagnoses years later. Corey was instrumental in helping vets navigate the VA system for other resources as well. In later years Corey became the primary caretaker for our mother during the last 4-5 years of her life 1999-2003. He served both her and Dad: doing the washing, cooking, cleaning, shopping, managing hordes of medication, taking them both to medical appointments and so on. He followed Mom’s instructions on food preparation and honestly probably knows secrets to Mom’s greatest recipes! We will always be eternally grateful to him for those years in caring for our parents. Corey led a pretty simple life, enjoyed watching sports, the History Channel, listening to rock and roll/Jazz and lifting weights. He had a lifelong of ups and downs but with the love and support of his family and especially his daughter, kept him focused and strong. Husband, Father, Uncle, Brother, Friends... Corey. May You Rest in Eternal Peace. Please join us for Corey's Celebration of Life 2 pm on Fri. Oct 22nd, 2021 at the Chapel of Chimes in Oakland. If you like in Lieu of flowers, Corey (and his family) would be happy if you donated to either of the following Charities in Memory of him. https://www.naturalhigh.org/donate/ https://nvf.org/veterans-donations/

Corey John passed quietly in his sleep in the early afternoon September 16, 2021. He had received excellent round the clock care by his wife and daughter at home for the last several months. He was 74. A native of Oakland, California Corey... View Obituary & Service Information

The family of Corey John Tridente created this Life Tributes page to make it easy to share your memories.

Corey John passed quietly in his sleep in the early afternoon
September...

Send flowers to the Tridente family.