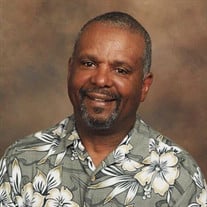 IN MEMORY AND CELEBRATION OF CONLEY MARSHALL CARR Conley Marshall (“Peach”) Carr was born in Xenia, Ohio on June 28, 1953, to the late Mary Elizabeth (Embry) Carr and James Carr Jr. Conley grew up in Richmond, Ky., and attended Richmond Jr. High & Daniel Boone Elementary schools where he played on the football team. Conley graduated from Madison Central High School in 1971, and was baptized as a member of Mt. Nebo Baptist Church in Richmond, Ky., under the direction of Reverend Clark Wright. Conley enlisted in the Navy shortly after graduation from high school, where he served for 4 years and traveled to Singapore, Thailand, and South America (Brazil). While in the Navy, Conley studied martial arts and achieved Black Belt status. He attended San Diego State and Cal State Universities after his military service in the Navy, where he majored in Films & Cinematography. He spent 20 years as a hardworking employee of UPS before moving on to start his own business, Carr Properties. Conley was a long-term resident of the state of California, having lived in San Diego and the Bay area (Oakland) for more than 30 years. He loved the outdoors and enjoyed skiing, boating, camping, fishing, jazz music, “old school” blues and road trips on his Harley. Conley departed this life on March 22, 2022 at 9:20 a.m. He is preceded in death by his parents, Mary E. (1991) and James Carr Jr., (2014) and a daughter, Robin Watts (1972). He is survived by his long-term domestic partner, Dira (Pelmore) Joseph, a daughter, Kristina L. Carr, a son, Conley M. Carr II, a sister, Jan E. Carr, daughters Crystalyn Joseph and Keisha Holmes, and grandchildren Turner Jones, Savannah Jones, Janira Pelmore, Laia Albert, and a host of friends and neighbors.

The family of Conley Marshall Carr created this Life Tributes page to make it easy to share your memories.

IN MEMORY AND CELEBRATION OF CONLEY MARSHALL CARR

Send flowers to the Carr family.