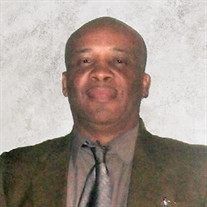 Clifford Douglas Allen, 59, of Oakland, California, passed away on Friday, May 1, 2020. Clifford was born in Berkeley, California on February 5, 1961. He graduated from Castlemont High School in 1979. Clifford entered the world of work immediately after graduation. He worked many jobs with the majority of his career spent working/supervising in the field of warehousing. Clifford worked for several companies including Caliber Logistics, Fireplace Systems, Ryerson Steel, and Yale Security. His last position was as a custodian for the City of Oakland. Clifford, affectionately known as “Goo Goo”, had a passion for music. In his studio, Clifford enjoyed creating music and supporting the careers of other musicians/singers. He used his music and sense of humor as a tool to provide wise counsel to so many people. Clifford’s father George and son Germaine, preceded him in death. He is survived by his mother Darniece Allen, sister Lequita (John) Burden, brother Darrell Allen, sister LaTanya Allen, brother Michael (Alisa) Jackson, nephew Rodney Pryor, niece Marissa Burden, nephew Jacarey Jackson, his longtime companion, Vanessa Cormier and a host of cousins. Funeral Services will be held at 11 a.m. on Thursday, May 14, 2020 at Chapel of the Chimes in Oakland, California. To ensure the health and safety of our community, we are following all guidelines set by local, state and CDC officials. If you are planning on attending a service, please contact the funeral home in advance, so that we can plan accordingly.

Clifford Douglas Allen, 59, of Oakland, California, passed away on Friday, May 1, 2020. Clifford was born in Berkeley, California on February 5, 1961. He graduated from Castlemont High School in 1979. Clifford entered the world of work immediately... View Obituary & Service Information

The family of Clifford Douglas Allen created this Life Tributes page to make it easy to share your memories.

Send flowers to the Allen family.