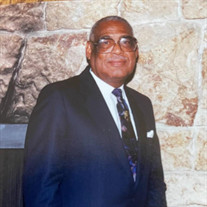 Clarence Eugene Kyle was born on September 28, 1921, to Julia Salter and James Royster, Sr. in Pensacola, Florida. Separating after a few years, Julia married Henry Kyle and together they provided Clarence with a nurturing upbringing rooted in faith and community. Clarence was the son of Deacon and the eldest of eight. He described his early life as ‘good’. Because Pensacola was a military town, the community was diverse, which helped buffer a lot of the local prejudices. Industrious and pioneering, Clarence made his mark in every endeavor. In 1941, he was drafted into the United States Navy, assigned to Bakery. Although Clarence had preferred an assignment as a Gunner Mate, he excelled in Bakery and became the only one in his class to achieve a rank. In 1945, Clarence received an Honorable Discharge. In 1941, Clarence married Hazel Smith from his hometown of Pensacola. With his last military assignment at Treasure Island, San Francisco, they settled in Berkeley, where they raised their daughter Michon. In 1956, Clarence began his career as a Deputy Sheriff with the Alameda County Sheriff’s Office. He was among the first three Blacks to integrate that rank. In 1979, after 23 years of dedicated service, Clarence retired as Sergeant. He then went on to obtain an Associate of Arts degree in Supervision Management from Laney College and returned to the workforce as a Court Attendant in the Alameda County Municipal Court. In 1994, Clarence received his second retirement from Alameda County. Clarence strongly believed in community building. After settling in Berkeley, he and Hazel dedicated themselves to Downs Memorial Methodist Church in 1949, under the leadership of the late Bishop Roy Nichols. With only 24 members, they built the church sanctuary, and through their dedication and great leadership, membership grew to over 800. Clarence was involved in organizing the first Usher Board, the United Methodist Men of Downs, where he served as Secretary, and Lay Leader for 16 years under the leadership of Pastors Fitch and Sauls. In the early 1950’s, Clarence and a few other tennis enthusiasts saw a need for Blacks, in their segregated community, to have a suitable place to play tennis and service youth. They formed the first Black tennis club, San Pablo Tennis Club (SPTC) at San Pablo Park in Berkeley. Clarence served as the Secretary and liaison with City personnel to ensure the courts were well-maintained and equipped with lights, seating and nets. As the club developed, the tennis courts became an integral place for the Black tennis community, and later home to the United States Tennis Association Men’s Championship team. In June 2021, as the only living founding member, Clarence was among the honorees at the rededication ceremony of the SPTC. His name is memorialized on a beautiful monument at the tennis courts. Clarence was involved in many civic organizations. He served on the Board of Directors of the West Oakland Boys and Girls Club, the Black Repertory Theater, Neighborhood Organizer in Berkeley, President of the Homeowners Association in Oakland and the Freemasons, where he achieved the highest rank of Sublime Prince of the Royal Secret, 32nd Degree. In 1992, Clarence married Doris Harlins. Both retired, they enjoyed traveling. Clarence cared for Doris until her death in 2020. Clarence was known as a “Classic Gentleman”. He could always lure someone to his home with ‘a pot of greens’ or fresh baked bread or cookies. He enjoyed watching football and trash talking about the games with his brother, traveling the world, growing orchards, playing the “slots”, creating memories with Naomi, and more recently getting pedicures. Clarence once shared that his most enjoyable undertakings in life revolved around his family, career and the satisfaction in helping people. He was unwaveringly devoted to his family, and whose example created a guiding light for others to follow and use as a blueprint in their lives. Clarence was preceded in death by his parents, Julia and Henry Kyle; siblings: Frank and Alphonso, wife Hazel of 48 years (1989), grandson Otis Sangster (2010), daughter Michon Taylor (2011), stepson Peter Harlins (2015), and wife Doris of 28 years (2020). Clarence’s legacy lives on through his siblings: Sandra Kyle Hodges (Pensacola, FL), James Royster, Jr. (Elease) (Houston, TX), Fred Royster (Willia) (Cypress, TX), Doris Smith (Moss Point, MS) and Carrie Biggs (Monroeville, AL); granddaughter Nicole Sangster (Berkeley, CA) great-granddaughter Naomi Sangster (Berkeley, CA), Goddaughter Celeste Jones (Willie) (Patterson, CA), step sons Charles (Pricilla) (Oakland, CA) and Jon (Renee De Leuze)); step grandchildren David Harlins (Oakland, CA) and Danielle Jones (Las Vegas, NV); son-in-law Jim Taylor (Richmond, CA) and a host of nieces, nephews and family friends.

Clarence Eugene Kyle was born on September 28, 1921, to Julia Salter and James Royster, Sr. in Pensacola, Florida. Separating after a few years, Julia married Henry Kyle and together they provided Clarence with a nurturing upbringing rooted... View Obituary & Service Information

The family of Clarence Eugene Kyle created this Life Tributes page to make it easy to share your memories.

Send flowers to the Kyle family.