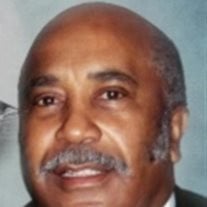 On a warm summer day, August 20, 1934, Chester Lavanson Charles was born in Mansfield Louisiana. Chester was the 12th child of 14 children born to Robert and Eula Charles. He had 4 brothers and 8 sisters. They all lived in a small house built by his father on a 13 acre plot of land. Chester was a teenager when he moved to the San Francisco Bay Area to join his older siblings, Robert Lee Charles and Edith Edwards. They felt opportunities would be more available to him in California. Chester graduated from Mission High School located in San Francisco. As an adult Chester worked as a Merchant Seaman. His work as a merchant seaman allowed him to travel to many parts of the world and he reveled in sharing many stories of his travels with his family. As a merchant seaman, he was a cook and developed skills that allowed him to work in various restaurants when he decided to settle down in the Menlo Park area. He later worked for Lockheed Martin Aerospace, Inc., a company whose specialties included aeronautics, electronic systems, aerospace and defense. At the age of 65, a fit and happy man, Chester retired form Lockheed Martin. Chester is the father of three children: Chester Anthony, James Edward and Nina Simone. Chester truly loved his family, and he was a person his family could always count on. Chester was the ultimate entertainer. He loved to sing, dance and laugh. He sang in a number of bay area clubs. During the Charles Family Reunions he was and active participant in many performances. Those who attended the reunion in San Francisco favorably remember his rendition of “Mustang Sally”. Chester made a special effort to remain fit. Among his hobbies were bike riding, walking, cooking, and dancing. He loved traveling and visiting his family. Chester is preceded in death by his mother and father; his siblings Claudia, Willa, Robert, Warren, Irving, Beulah and Delphyne. Chester leaves to cherish his memory: siblings – Mary Ester, Edith, Audrey, Geraldine, and Edwin; his children Chester Anthony Charles, James Edward Charles and Nina Simone Chester-Bradle — Twelve grandchildren, six great grandchildren and a host of nieces and nephews.

On a warm summer day, August 20, 1934, Chester Lavanson Charles was born in Mansfield Louisiana. Chester was the 12th child of 14 children born to Robert and Eula Charles. He had 4 brothers and 8 sisters. They all lived in a small house built... View Obituary & Service Information

The family of Chester L. Charles created this Life Tributes page to make it easy to share your memories.