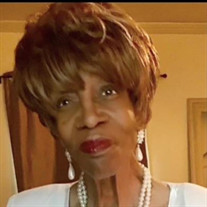 On Friday, December 13, 1938, at Hammond Memorial Hospital in Byron, Texas, Rosa Mae Hatchett and Chester Arthur Hatchett were awaiting the birth of their baby boy. Her doctor, as well as Chester's mother, Ida M. Stern, had both thought the baby would be a boy - and were usually right - but, the baby was a girl; they named her Chesta Mae. However, on July 29, 1940, the couple had a baby boy, and they named him Arthur James. On July 30, 1943, a third child was born. She was named Daisy Lee, after Rosa's mother, Daisy M. Lewis, affectionately called "Mama Daisy". Chester's mother, Ida, moved to Oakland, California; taking her three grandchildren ( Chesta, Arthur and Daisy) and Mama Daisy too. Chesta Mae professed Christ at an early age. At 12 years old, she was baptized by Reverend Ansel Ogden Bell at North Oakland Missionary Baptist Church. Her mother, father, brother, sister, both grandparents and her great grandmother all attended that church. Later the family moved to Berkeley, California. The following school year, Chesta attended Columbus elementary, Burbank Jr. High and graduated from Berkeley High school at the age of 17, in July 1956. Chesta attended Merritt Jr. College. She later met and fell in love with James Barnwell Morris. On may 29, 1958, she gave birth to a beautiful baby girl; they named her La Ronda Anne Morris. In 1960, she met and married William C. Warren, and on October 12, 1961, another baby girl was born; she was named Traci Rochelle Warren, after Chesta's mother, Rosa M. Hines. On January 28, 1963, Chesta was blessed with beautiful twin boys, Robert Eric Warren (weighing only 4lbs, 2oz) and Robert Errol Warren (weighing 3lbs, 9oz). The boys remained in the Neonatal Intensive Care Unit at Herrick Hospital in Berkeley, until they weighed 5lbs, and then they came home to a family that was glad to meet them. Chesta And William Divorced in 1970. She later was introduced to a Navy man named Arthur James Brantley ("AJ") in September 1974. They quickly fell in love and were married in her mother's home on July 5, 1975. AJ wanted to get married right away because he was being transferred out of the country and wanted to take Chesta with him. Chesta had four children and AJ had two daughters, Pamela Kay Brantley and Phyllis Deneen Brantley. They call themselves "The Brantley Bunch". Chesta and AJ relocated to Sardinia, Italy. The twins (Robert and Ronald) stayed with their father. Le Ronda stayed with her grandparents and Traci went to Italy, as well. A very close friend, Chiara Harmes, taught Chesta how to speak fluent Italian. Chesta worked in military and personnel offices the entire two and a half years they were in Italy. Chesta and AJ were then transferred to Orlando, Florida for one year and then to San Diego, California, where AJ retired after 22 years of service in the Navy. They then moved to Oakland where her friend got her a job at Oak Knoll Naval Hospital. Chesta retired on July, 1 1993 at the age of 55, with more than 35 years of working for the Navy. Chesta belonged to several organizations. She was a member of Menelik Court #53, the female branch of the Shriners. She was also a member of the Order of the Eastern Star and was initiated into the Regina Chapter #67 in 1993. In 2000, Chesta was elected as the Worthy Matron, the highest position in the Chapter. AJ, her husband, was chosen to be Worthy Patron. Chesta was the first Worthy Matron to have her mother (Rosa Hines)as Past Matron and her step father (Robert Hines) as Past Patron. Chesta was proceeded in death by her loving mother, Rosa Hines; father, Chester Arthur Hatchett; stepfather, Robert F. Hines; son, Robert Eric Warren; stepdaughter, Pamela Kay Brantley; grandmothers, Daisy Lewis ("Mama Daisy") and Ida Stern; and great grandmother, Matilda Griffin. She leaves to mourn her passing: brother, Arthur Hatchett (wife, Charlene); sister, Daisy Hall; children, Le Ronda Gaines (fiancee' Manuel Quinn), Traci Rochelle Warren (partner, Renee Watts), Ronald Errol Warren (wife, Toni); stepdaughter, Phyllis Blakeley (husband, Anthony); seven grandchildren; Enon, Nia, Rae, Da'vie, Jabari, Niguel and Juwan; Auntie Eddie Mure; special friends; Bertha M. Paul and Rollie J. Paul Jr., Caregivers; Verna Jackson and Natdell Stone (who took excellent care of her and whom she loved as family, and other family members loved them, as well); and a host of dear friends. Special recognition to Chica, Chesta's seven pound Yorkshire Terrier, certified guard dog and companion who she loved very, very much; and Sheeba Warren, Traci's 80 pound gentle German Shephard. Sincere gratitude to her children: Le Ronda for handling healthcare and finances. Traci and Rene for opening their home (so she could avoid going to an assisted living facility). Ronald for countless quality time visits, watching sports together and making her favorite chicken salad. Please know that your mother, Chesta, truly appreciated each of you and loved you very, very much!

On Friday, December 13, 1938, at Hammond Memorial Hospital in Byron, Texas, Rosa Mae Hatchett and Chester Arthur Hatchett were awaiting the birth of their baby boy. Her doctor, as well as Chester's mother, Ida M. Stern, had both thought the... View Obituary & Service Information

The family of Chesta Mae Brantley created this Life Tributes page to make it easy to share your memories.

Send flowers to the Brantley family.