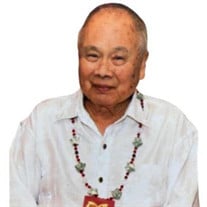 Charles Kai Chinn, 97, of San Ramon, CA passed away peacefully on May 26, 2020. Charles was known to many of his friends as “Charlie” and was born in Boston, MA on September 15, 1922. After a few years of his birth, he and his mother returned to the province of Canton China, where he spent most of his childhood. In March 1938, at age 15, he sailed back to the United States, where he was placed at Angel Island Immigration Station for several months for processing. Upon his release, he took residence in Oakland, CA with his family. Charlie did his education in Oakland, CA., and before he completed high school, he was drafted into the United States Army. Charlie served his country from 1941 and was Honorable Discharged in December 1945. During his military service, Charlie fought in WWII at Rhineland, Ardennes-Alsace and Central Europe campaigns with the 84th Army Infantry, 333th Regiment, HQ Command Division and received a field promoted to the rank of Corporal. He and his Army Unit received several military citations during these battles. When Charlie returned from the war, he continued his education, receiving his high school diploma. Charlie worked at the US Naval Air Station in Alameda, CA as a Journeyman Metal-Smith for over 35 years before retiring in 1985. Charlie was a member of the Veteran of Foreign Wars (VFW) Post 3956, a member of the Oakland Chinatown Chinn Family Association and a recognized Chinese-American WWII Veteran Recipient, who will be entitled to the Chinese American World War II Congressional Gold Medal Recipients award (https://www.caww2.org). Charlie is survived by four children: Lotus (Gene) Go; Rosalyn (Gordon) Hum; Gregory Chinn; and Charlene Nakagaki. Five grandchildren: Jeffrey and Kendrick Go; Christina and Deanna Chinn; and Jennifer Nakagaki. Four great-grandchildren: Jordon Go; and Nathaniel, Elise, Joshua Go. His sister: Mabel Sim Chiu; his sister-in-law, Shue Woon Chinn; and many nephews and nieces. Services will be private due to the current Covid 19 restrictions. In lieu of flowers, the family is requesting that donations be made to the any Animal Shelter or Rescue Center or a Charitable Organization of your choice. To ensure the health and safety of our community, we are following all guidelines set by local, state and CDC officials. If you are planning on attending a service, please contact the funeral home in advance, so that we can plan accordingly.

The family of Charles Chinn created this Life Tributes page to make it easy to share your memories.

Send flowers to the Chinn family.