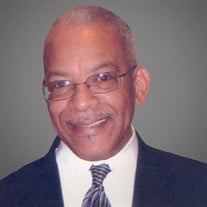 Byron Clayton Thompson was born June 16, 1953, to Jesse Bolts Thompson and Madie Belle Thompson in Oakland, California; he was the third oldest child of 7 siblings. He attended Oakland public schools graduating from Skyline High School, going on to attend the University of California, Davis earning his bachelor’s degree in Political Science. He furthered his education at Washington University Law School in St. Louis, Missouri where he received his Juris Doctor degree. Byron entered the California State Bar Association in 1979 and became Byron C. Thompson, attorney at law, successfully practicing law for over 30 years. During his time at UC Davis, Byron spent time as an actor, an on-air radio DJ and a writer. He was also a proud member of Alpha Phi Alpha Fraternity Incorporated, a proud legacy he passed on to both of his sons. Byron was also a Master Mason and long-time member of Fred C Brooks Lodge No. 60 in Oakland, CA alongside many of his family members. He was an active member at Shiloh Baptist Church of Hayward, CA for over 50 years. He was an adventurous man who loved to travel, and shared this enthusiasm with his children, constantly introducing them to new things and people. His passion for education was steadfast, something he instilled in his three children serving as their biggest proponent to excel. His ability to connect with and elevate anyone was simply infectious and a testament to his true humanity and strength. He was a loving son, wonderful brother, devoted father, and amazing friend. His hard work and commitment to his community was unparalleled. His love for his children was unmatched. He will forever be remembered for his cool style, dapper suits, and warm heart. His grace and quiet dignity made him a very well respected and revered man who never hesitated to help those in need whenever possible, he will be missed greatly by all. Byron transitioned from this earth on February 20, 2022 and joined his parents Jessie B. Thompson and Madie B. Thompson, and his sister, Schurniece Thompson. Byron leaves to cherish his memory his daughter, Jasmine McGee ( Jerome) sons; Adam Thompson- Harvey (Alex) and Byron Thompson, brothers; Jessie (Marilyn) and Hilary Thompson, and sisters; Deborah Thompson-Austin (Ronald), Delores Thompson, and Michelle Thompson-Sims (Damen); nieces and nephews: Patrice Heard, Jeanette Thompson, Michael Brewer II, Yancie Davis, Deborah Thompson-Green, Jessica Sims, Sunday Simon, Dominique Austin; great-nephew James Green Jr.; and grandchild Jaliyah McGee; Godson Ronald Thompson-Herd, Jr.; uncles Everett, Sylvester, Clifford, Robert, and Donald Ray; aunts Maelene, Patricia and Jacqueline; as well as a host of extended family and loved ones.

The family of Byron Clayton Thompson created this Life Tributes page to make it easy to share your memories.

Send flowers to the Thompson family.