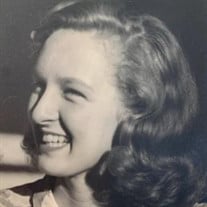 Barbara Warren Flegal August 12, 1923 - March 10, 2022 Aptos, California Barbara Warren Flegal was born in Oakland on August 12,1923, to Adelaide and Dr. Gerald Warren. Her brother Jerry was born 12 years later. She grew up as a city girl but spent her summers at her Uncle's farm in Willets. The farm didn't have running water or in-door plumbing, but Barbara loved it and spoke of her joy in driving tractors as a teenager. At 14, she decided that she wanted to attend the neighboring school, Piedmont High. Independently she petitioned the School Board and surprisingly they approved her enrollment. Her father then bought her a Model A so that she could "commute " to school. Barbara began her nursing studies at the University of California at Berkeley, and completed them at Highland Hospital's School of Nursing in 1946. She met and married Navy Lieutenant Arthur Russell Flegal in 1943, just as WWII was breaking out. He was literally, "the boy who lived next door." They honeymooned for 3 days before Art was shipped out to the South Pacific for 3 years. During that period she received a dispensation to stay enrolled in the residential nursing school because at that time married women were not allowed in the program; and then became a U.S.Cadet Nurse, caring for civilians and soldiers who returned home with injuries. Barbara and Art began their family in Oakland. They made brief moves to Fresno and Bakersfield, before returning to Piedmont in 1956, where they lived for 58 years and raised 4 children. Barbara was a devoted mother and very active in the community, church and schools. She served as President of the PTA, Board Member of Campfire Girls and as a Founding Member of the Piedmont Historical Society. She also volunteered as a nurse at Planned Parenthood and the American Red Cross. Barbara loved her career at Highland Hospital as a nurse, nursing instructor and Assistant Director of Nursing. She always told stories of how much she loved working in the ER. She even received Christmas cards from members of the Hells Angels, who were grateful patients! Upon retirement Barbara joined her husband in their antique business: Return Engagement. She and Art had a passion for antiques, especially Georgian silver. They traveled often to the United Kingdom to seek out rare and beautiful silver. They had a shop in San Francisco and participated in numerous antique shows. Barbara moved to Aptos ten years ago after Art passed away. She joined the Aptos United Methodist Church, where she was nicknamed, "the cookie lady," because she baked countless dozens of cookies for the church, homeless and group homes. Her last day on this earth she was making cookies for her great grandchildren! She also made weekly visits to nursing homes to see patients who were usually younger than she was. She was extremely creative - her knitting was something that she enjoyed her entire life. Her children, grandchildren and great grandchildren were the lucky recipients of many sweaters. Barbara was someone who led the life that she wanted. After her husband died she lived alone, did her own shopping, cooking, drove her own car and owned many Labrador Retrievers. A highlight of her mornings was a daily 2 mile walk at Seacliff State Beach, where she knew every dog's name and loved greeting them and their owners. She was over the moon with joy when last August 12th, her 98th birthday, the morning walkers and their dogs threw her a surprise party. Barbara attributed her longevity to optimism and the acceptance of change. Her outlook on life embodied that. May we all walk in her grace. Barbara was predeceased by her parents Adelaide and Gerald Warren, her brother Jerry and her son Warren. She is survived by her children Arthur Russell Flegal Jr., Leslie Jean Flegal and Stephen Peter Flegal, her grandchildren, Heather Flegal, John-Arthur Flegal (Nicole), Elizabeth Simonsen and Edith Simonsen, and three great grandchildren, Marisa and Genevieve Wood and Brendan Flegal. Barbara's celebration of life will be held on Saturday, May 21, at 2pm at the Aptos United Methodist Church, 221 Thunderbird Drive, Aptos Donations in her memory may be made to the Second Harvest Food Bank, 800 Ohlone Parkway, Watsonville Ca, 95076.

The family of Barbara Warren Flegal created this Life Tributes page to make it easy to share your memories.

Send flowers to the Flegal family.