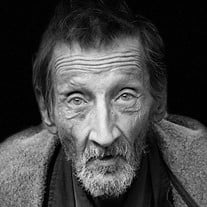 Arne Svendsgaard was born November 10, 1952. He died on January 5, 2020. He died doing what he loved, hanging out with a friendly feline while listening to jazz. Arne was a happy soul and a well-known Oakland character. He enjoyed the simple pleasures of life. He loved music, animals, nature, anything with wheels, anything that flew, and any type of boat. As a teenager, Arne developed great taste in music and began to play both the guitar and bass. For several years he played bass in a rock band called “The Bad Boys.” His siblings were big fans and loved dancing around to the band’s music. Arne continued to enjoy and play music his whole life. He loved attending the First Friday events in Oakland and watching his many friends play live music. Arne was very smart with electronics and anything mechanical. He was a natural inventor. He built a computer as a kid in the early 1970’s. He also built his own beautiful Norton motorcycle from spare parts when he was a young man. Sadly, he endured serious injuries on that motorcycle that caused him lifelong pain and stress. In spite of his disabilities, he still found joy in life almost every day. Starting at a really young age, Arne could figure out what was wrong with a car when no one else could. He repaired many, many cars and appliances, and eventually restored a classic Rio truck to mint condition. (He sold the truck rather than drive it.) He built dozens of large model airplanes, which he loved to fly. Because he could fix almost anything, Arne scrounged electronics and tools when others discarded them. He had more soldering irons than anyone should! He enjoyed tinkering with models and electronics alone in his crowded, messy room while listening to jazz. Arne really loved talking to people and drinking coffee. He loved to talk with passion about life and had encyclopedic knowledge on several subjects. Arne also suffered from mental illness, so some of his stories and opinions were way out in left field, but they were almost always entertaining. During the last decades of his life, Arne recorded videos of street music and still images of street art and animals all over Oakland with his trusty digital camera. Also, because he was interested in the advancement of mobility devices for the elderly and disabled, he became a subtle (and sometimes not-so-subtle) activist. He created and shared poster art, mostly with wry political commentary. He chronicled in videos the Oscar Grant protests, Occupy Oakland, the Women’s Marches, and other political events in Oakland. Arne had many friends and was well-loved. He was preceded in death by his mother Susan, his father Arnold, his stepfather Taylor Fitzpatrick, and his sister Janna. He is survived by his brothers Eric, Chris and Chel, his sisters Tina and Heidi, and his nephews and nieces: Kantad, Dudley, Jason, Max, Kyler, Jane, Susie, Avery, Miles and Kiernan. He is gone but will never be forgotten. He was funny, sweet, kind and gentle. WE LOVE YOU ARNE!!!! In lieu of flowers, please consider making a contribution to an organization in Arne's memory: Link to “Fix our Ferals” https://donatenow.networkforgood.org/FixOurFerals?code=FOF%20WEBSITE%20-%20Support%20Us%21%20page Link to “Treatment Advocacy Center” - National non-profit dedicated to eliminating barriers to the treatment to people with the most severe* mental illnesses - every dollar goes to fighting for mental health reform * severe means conditions like bipolar and scitzophrenia https://interland3.donorperfect.net/weblink/WebLink.aspx?name=E49040&id=5

Arne Svendsgaard was born November 10, 1952. He died on January 5, 2020. He died doing what he loved, hanging out with a friendly feline while listening to jazz. Arne was a happy soul and a well-known Oakland character. He enjoyed the simple... View Obituary & Service Information

The family of Arne Svendsgaard created this Life Tributes page to make it easy to share your memories.

Send flowers to the Svendsgaard family.