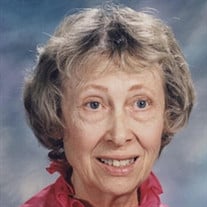 In Loving Memory of Arlene Hall.... Arlene Linnea Swanson Bethke Hall was born April 19, 1927 to parents Sigrid and Herbert Bethke of Sweden and Germany respectively. She was 1 of 3 children: Louise, a sister and Norman, a brother completed the family. Her family moved to California from Neenah, Wisconsin while Arlene was still a teenager, and shortly after arriving, joined the ministry of Christian Temple (now Christian Cathedral) under pastor/founder, doctor Bebe Patten. Arlene soon enrolled in Patten Bible College where she received a bachelor's degree in theology in 1950. Arlene was an active member of the Flying Girls Choir traveling with Dr. Patten and singing during worship services, as well as an active part of the Sisters of Service, helping whenever and wherever she could. Arlene shared with Dr. Patten that the Lord had spoken to her in a dream, calling her to the teaching ministry. As a trailblazer, Arlene was the first to prepare professionally for teaching and Patten Academy of Christian Education (PACE). She soon left for Seattle Pacific University where she studied early childhood education and was a member of the Sigma kappa Delta honor society. After receiving her BA degree in 1960, Arlene returned home and began teaching the first and second grades at PACE that same year. She taught these classes combined for many years before settling in with kindergarten. Mrs. Hall retired in 2010 after having taught for 50 years. Arlene caught the eye of Robert Hall whom she won with her homemade lemon meringue pies. Bob always proclaimed his wife as the best woman, and especially, the best cook in the world. Arlene would simply smile and say, “Oh, Bob.” Although Arlene was with children five days a week, all day long, she had always wanted her own child. So, she and Bob adopted a son, Danny, whom the Lord saw fit to bring home when he was just five years old. After Arlene retired and Bob had gone to be with the Lord, Arlene's health became frail, and she spent the last few years of her life at a Crown Bay in Alameda. Whenever she received a visitor from Christian Cathedral, she would respond, “Oh, good, we're going to church.” Or, whenever a fellow teacher visited, her response was, “Oh, how are the children?” Arlene's life was her church and her teaching. With her gracious, quiet, gentle spirit, Mrs. Hall patiently and kindly touched the lives of hundreds of children -- introducing them to the alphabet, numbers, reading, and especially, Jesus. Proverbs 31:10, 26-28 fittingly describes Arlene's selfless devotion to God, children, and children's children: “Who can find a virtuous woman? For her price is far above rubies…Strength and honor are her clothing and she shall rejoice in time to come. She openeth her mouth with wisdom; and her tongue is the law of kindness. She looketh to the ways of her household, and eateth not the bread of idleness. Her children rise up and call her blessed and her husband also praiseth her.” "Good, better, best--Never let is rest. Til your good becomes better, and your better becomes your best!"

In Loving Memory of Arlene Hall.... Arlene Linnea Swanson Bethke Hall was born April 19, 1927 to parents Sigrid and Herbert Bethke of Sweden and Germany respectively. She was 1 of 3 children: Louise, a sister and Norman, a brother completed... View Obituary & Service Information

The family of Arlene Linnea Swanson Bethke Hall created this Life Tributes page to make it easy to share your memories.

Send flowers to the Hall family.