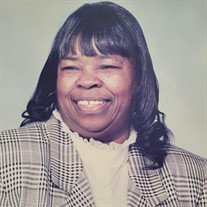 Annie Mae Walker McNeill Cates was born January 19, 1936 to Thaddeus and Catherine Walker in Bunnlevel, North Carolina. She was the oldest of five siblings. Growing up, she attended McLean Chapel Elementary School, then Shawtown High School. Mother Annie made a confession of Christ at an early age and joined her grandfather’s church, Faith Tabernacle Holy Church, in Bunnlevel, North Carolina where she met and married Sandy McNeill. Eventually, Mother Annie and Sandy relocated to Oakland, California. They were gifted with two daughters: Gwendolyn and Sandra McNeill. Later, Mother Annie and her family united with the Greater New Mount Hermon Baptist Church in Berkeley, CA, under the pastoral guidance of Reverend Nelson Davis. She worked faithfully and tirelessly to promote the kingdom. In 1981, Mother Annie and her husband joined her family to worship under the leadership of Apostle Alonzo B. Emerson. She served as part of the Mother’s Board and the chairperson of the Senior Mission Board, as well as chairperson of the Pastor’s Aid. She also worked for United Airlines for many years, and eventually retired. After the passing of Sandy, she met and married Nathaniel Cates, and was a devoted wife until his death. Mother Annie was a loving Christian woman, an active member, and an artist at heart. She loved every one of her pastors and members of her churches; she will always be remembered, not just for her good cooking and her strong spirit, but her dedication to her ministry and Christ-like attitude. She was preceded in death by her parents, Thaddeus and Catherine Walker, her husbands, Sandy McNeill and Nathaniel Cates, one sister, Betty Clark, one brother, Thaddeus Walker Jr., one nephew/godson, Michael Davis Sr., and one grandson, Lonzo Jones. She leaves a legacy of faith and love to her two living sisters, Patricia Davis (Darryl) and Dorothy Turner (John), two living daughters, Gwendolyn and Sandra McNeill of Oakland, California; her special niece, Shavon Walker (Jahi); her five grandchildren; her five great grandchildren; and a host of additional godchildren, nieces, nephews, cousins, dear friends, church families, Pastor Alonzo Emerson and all the saints who work toward the coming of the Lord.

The family of Annie Mae McNeill created this Life Tributes page to make it easy to share your memories.

Send flowers to the McNeill family.