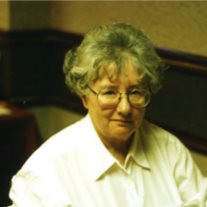 Anne Veronica (Rochette) Hay Anne Veronica (Rochette) Hay, 85, passed away at her home in Oakland, California on Thursday, September 17, 2015 after a long illness. Anne was born September 12, 1930, in Boston, Massachusetts, to the late Joseph Rochette and Veronica (Leamy) Rochette. She grew up in Worcester, Massachusetts where she graduated from St. Peter’s High School and Worcester State Teacher’s College. As a young woman, Anne traveled the world, visiting India, the Soviet Union, and teaching English in Japan and Germany. She later received her Master’s Degree in Library Science from Florida State University. While living in Colorado in the early 1970s, she met and married her late husband Gerald Hay. They lived in Delaware, Ohio, where their daughter Heather was born, and later moved to Raleigh, North Carolina. Anne moved to Oakland in 2011. Anne loved books and animals and enjoyed her many years’ work as a reference librarian, but her true passion was competitive Scrabble. A nationally ranked player for many years, she crisscrossed the country playing in tournaments for decades and was never more at home than behind the Scrabble board. In addition to her parents and husband, Anne was predeceased by her sister Rose Rochette. Anne is survived by her daughter, Heather Hay Watson (Duncan), and grandson Angus Watson.Memorial donations may be sent to the Fisher Center for Alzheimer’s Research.

The family of Anne Veronica (Rochette) Hay created this Life Tributes page to make it easy to share your memories.