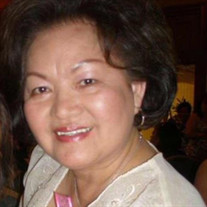 Angelita Posas Baylosis A Devoted Wife, Dear Mother, Proud Grandmother, Loving Great-Grandmother Angelita is survived by her loving husband Maximo Baylosis, their 2 daughters, Bernadette Baylosis Gard, Veronica Baylosis Morin and husband Keith, grandchildren Jessica Herrera and husband Alex, Victoria Morin, Michael Gard and Farrah Morin and great-granddaughter Genevieve Herrera. She also leaves behind her brothers and sisters in-laws Ernie and Violet Posas, Arthur and Teresita Posas, cousin Erlinda Herrera and many more cousins, nephews, nieces, godchildren and relatives. She was the manager and promoter of George Elizalde, who was like a son to her. Born in Rosario, Cavite, Philippines on January 11, 1940 to Victoriano and Leonida Posas. Angelita attended Cavite City High School and University Santo Tomas College of Pharmacy. She came to the United States at age 20 while her father served in the US Navy. After living at Lemoore NAS, Angelita settled in Alameda, CA. On August 7, 1965, she married Max at St. Joseph Basilica in Alameda. She has lived in her home for 53 years, where she raised her daughters and helped raise her grandchildren during her career and post-retirement. Angelita had a 25-year career with Wells Fargo Bank and retired as a Commercial Loan Supervisor. After starting her own travel business, she worked simultaneously for 14 years with Health and Human Services at the City of Berkeley. In addition to her career, she was a passionate and devoted entertainment manager and volunteered her time at Mastick Senior Center. Angelita didn't wait for retirement to travel the world with her family and friends, having frequented the Philippines, Hawaii, Japan, Paris, Canada, Mexico and the Caribbean islands. She stepped up her Cruising lifestyle upon retiring and led many travel groups. Her favorite ports included New Orleans, Panama Canal, Alaska, Puerto Rico, Singapore and Italy. She was involved in numerous groups and played both leadership and supporting roles. She was part of the St. Philip Neri community for many years while her daughters attended school, through her ministry as a Eucharistic minister and was an involved wife in the Knights of Columbus. She was a member and past President of the Filipino Women's Club of the East Bay; active in her hometown club, Rosarians USA; her husband's hometown, The Balayan Bay Area Club and was a founding member of the Santo Nino Prayer Group of the East Bay. Angelita made many friends during her active life and her incredible memory of her family and friends' lives made her our family’s encyclopedia. She was warm and welcoming, loved bringing people together, enjoyed dancing and her smile lit up a room. May She Rest in Everlasting Peace.

The family of Angelita Posas Baylosis created this Life Tributes page to make it easy to share your memories.

Send flowers to the Baylosis family.