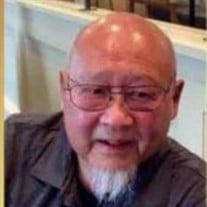 THE CEREMONY Military Honor Guard Eulogy Boy Scout Wood Badge - Bert Hill Lunch reception immediately following memorial service East Ocean Seafood Restaurant 1713 Webster St Alameda, CA 510.865.3381 Allen Lim was a father, grandfather, brother, uncle, cousin and trusted friend/mentor and generous to a fault to many throughout his life. CHILDHOOD 2nd generation born in San Francisco, he spent his childhood years split between San Francisco and El Cerrito at Chung Mei Home for Chinese Boys. As was typical for that era, Al attended grammar school then Chinese school for 2 hrs, 6 days a week to learn Cantonese. Al moved back to San Francisco to help with his sister, Kertice and attend/graduate from Galileo High School. MILITARY SERVICE In lieu of being drafted into the Army, Al opted to enlist in the Marine Corps and attended basic training @ Camp Pendleton in San Diego. Our dad shared very little of his time in the Marines perhaps as a means of self-preservation of what he observed. 2 often shared memories- 1) Our dear Auntie Maggie discovered Al was in boot camp @ Camp Pendelton (San Diego) and arranged for a driver (decades before Uber) to pick up/return dad fr Camp Pendleton to Oxnard (approx. 3 hrs RT) where Auntie Maggie/ Uncle Bob resided for a family visit and home cooked meal. 2) C-rations (canned meals in tins) were air dropped to land forces. Each tin contained a protein or crackers, cookie and instant coffee. 1 of every 48 tins contained a coveted chocolate disc instead of a cookie. When Connor expressed curiosity about military MREs our dad tried without success to secure one for a shared experience. Al’s final assignment in the Marines was Intelligence Ops which he thoroughly enjoyed, enough to consider re-enlisting, but instead fulfilled his 3 year obligation and was Honorably Discharged as a Corporal with Korean, United Nations and National Defense Service Medals. CIVILIIAN LIFE Upon his discharge from the Marines, Al enrolled in San Francisco City College and worked briefly for US Postal Service before he applied and was accepted in a 4 year Journeyman mechanic apprentice program @ Naval Air Rework Facility in Alameda. Upon graduation, Journeyman mechanic positions were not available, so he was transferred to the Instrument Shop and was given temporary position of Inspector. 3 years later promoted to Ops Analyst and in another 3 years promoted to Planner/Estimator until retirement Along the way Al got married, enjoyed an active social life (refer to pix of very “happy” gentleman at a NYE party at the home of dear friends Bill and Barbara Kitagawa) and started a family - with son, Michael, 4 years later daughter, Lori. A few years later, the decision to leave San Francisco to buy a home in the suburbs of Alameda County where Al resided the remainder of his life. Shortly after retiring from NARF, Al embarked on a 2nd career @ Enterprise Rent A Car as a driver/hiker moving cars between rental locations locally and within the Western US. In addition to hiking Al was a BBQ master for ERAC car sales events for many years. Al retired from Enterprise in Dec 2020 just shy of 30 years of service but gained friendships, discovered hidden food gems and an unbelievable knowledge of California’s highways and byways. Who needs GPS with Al? Allen loved… FAMILY An unbelievably proud grandfather to Ryan and Connor, one could feel his pride/love in their presence and thru his actions. After a visit to Legoland, it tugged Al’s heart to watch Connor unable to enjoy most rides which set off Al’s grand plan…Disneyland! One minor detail, the trip would wait until Connor reached 48” tall which is the height requirement for most rides at Disneyland. A humbled yet proud father to Mike and Lori-as an adult, I look back with more understanding on why our dad was a complicated individual and realized his actions/gestures (big or small) spoke louder than words and would often make personal sacrifices to support his children in later years. Al was a brother to Kertice, cousin to Gary, the Lam Clan and many more, and favorite “Uncle Al” to many neices and nephews. FRIENDS A wealth of friends including Bill & Barbara Kitagawa, NARF buddy, Dave Tracy, ERAC friends Bill and Elgin, Ted and the Country Way gang, the entertainment factor in weekly Covid video calls (affectionately known as “Geezer”) and designated commander for Vinnie’s truck rescue. FOOD Al loved good food, fancy or hole in the wall made no difference, quality and taste is what mattered to Al. Many hidden gems were discovered as Al criss-crossed Northern California hiking cars with Enterprise. • Fish n’ Chips (Santa Rosa) • A good deli sandwich (Lafayette) • Pizza (Cloverdale) • Linguica and grilled onions on sourdough roll (Country Way) • Garlic bread Al had Lori on an endless quest for the best; • Meatball sandwich • Tomato Beef with old school flavor and skinny noodles FOOTBALL DIEHARD 49er fan TRAVEL Japan, Guam, Korea, Midway Island courtesy of the Marines Philippines/Hawaii, Washington DC courtesy of the Navy, Denver West states courtesy of ERAC and Greece/London with friends. In the end Al did it his way… Al had a lifetime filled with love of family, friends, good food, laughter. Thankfully Al’s advice, sacrifices and cherished memories will continue to be embraced and carried forward by all who loved him and now miss him dearly. Thank you to our family and friends for your kind words of love and support, cards and flowers following Al’s passing. In lieu of flowers, please consider a donation to a preferred charity in memory of Al. Please click the following link to join Allen's Memorial Service: https://www.econdolence.com/join-viewneral?jc=10000:68j0ZqACYtgQq0n8LqjnyagdwEEEIv2y:dD4W9EmLmaB4y+N4dO3rGw==:w+xqUZ38SztUdHwyWp4qXQ==

The family of Allen Lim created this Life Tributes page to make it easy to share your memories.

Send flowers to the Lim family.