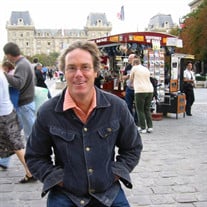 Alan Birkholm Parrish was born in Fort Bragg, California. He often referred to himself as “a fourth generation Berkeley native.” He lived there much of his life until his death from a long-term illness in July. He was a talented artist, a caring father and brother, and a fun-loving loyal friend. Passionate about many things, Alan enjoyed art, nature, travel, spirituality, swimming, surfing, golf, football, wrestling, hiking, biking, and sailing. The greatest love of Alan’s life was his daughter, Annika Poppy, who was born in 2009 and named after the California State flower. Alan shared with her his love of nature and plants and taught her how to bike, swim, fish and paint. She inherited his inquisitive and adventurous spirit and they spent many happy times at the beloved family cabin at Silver Lake. Alan planted several trees for her at his Berkeley home and a bed of California poppies adorns the front yard providing a colorful reminder of his eternal love for his daughter. The fourth of five children in his family, Alan was named after his paternal grand-father, Alan Roy Parrish. His parents, Edwin “Pete” Parrish and Karen James Birkholm graduated from the University of California, Berkeley, where they met. Alan was a sensitive and happy child known for his inquisitive nature. He was gifted with natural athletic abilities. One of his family’s favorite memories of Alan was watching him do flips off the high dive at a very early age. In high school, he was an accomplished wrestler and football player. His considerable artistic skills began to emerge in high school. Like his mother, Alan expressed a life-long interest in painting. He received a Bachelor’s degree from California College of the Arts (1998) and a Masters of Fine Arts degree from Mills College (2004). For many years his artwork was shown at the SFMOMA Artist’s Gallery at Fort Mason Center. Alan was always interested in fostering a sense of community and belonging. In a cover letter for a job at a beloved Berkeley Co-op, he wrote: “Since the time I helped found the food co-op at the University of Maryland in 1979, I have enjoyed working with food in a cooperative situation. I do best as a team player in a system where there is no boss. I’m looking for a place to belong, where people are like-minded and work is not all you are but rather a right livelihood and a shared experience of community. I love to paint but I don’t want to make it my career. I’d rather work in a community and have security for the future.” He added, “On the whole, I try to listen to people and have compassion. I try not to take things too seriously. I’m not perfect and when I’m wrong I try to promptly admit it.” In 1996-1997, Alan spent a year abroad in Florence, Italy, and studied Art Restoration at the Studio Arts Center International. There he learned to restore canvas, wood, paper and clay. He worked directly on the restoration of “Assumption of the Virgin” by Francesco Curradi (1661). Alan’s brother Robert recalled that on his last trip to the family cabin at Silver Lake, Alan took the time to restore his cousin’s drawing of Thunder Mountain. Alan had many jobs during his lifetime, including five years as a Museum Preparator for the U.C. Berkeley Art Museum. He held similar positions at the Oakland Museum of California and the Asian Art Museum of San Francisco. One of the jobs he was most proud of was art teacher for disabled adults. He described this experience in a letter: “I proposed a new program at Futures Explored where I would teach painting to developmentally disabled adults. The proposal was accepted and I began teaching beginning painting. I decided to challenge my students. We started with a still life study using only black and white paint. To my delight, things went really well. My students astounded me with honest representations, which surged with their own life. We painted the same still life again, adding grey. After that we added simple color—one warm, one cool. By the end, the paintings were astonishing. Each student had a different view and all of them were much more confident than when we began. This experience taught me about patience, and non-judgment. It has given me insight into helping developmentally disabled people succeed at making art.” Alan’s compassion for helping people extended to his last job as a technician on the Psychiatry Unit at Alta Bates Summit Medical Center. He endeavored to support those recovering from mental illness and addiction. Alan is survived by his daughter Annika Poppy Parrish, and by his siblings Karen, Kimberly, Maren, and Robert Parrish. His original artwork can be viewed at www.alanbirkholmparrish.com. A memorial will be held in celebration of Alan’s life on September 19, 2021 at 3pm at 2638 Warring St, Berkeley.

Alan Birkholm Parrish was born in Fort Bragg, California. He often referred to himself as “a fourth generation Berkeley native.” He lived there much of his life until his death from a long-term illness in July. He was a talented artist, a caring... View Obituary & Service Information

The family of Alan Birkholm Parrish created this Life Tributes page to make it easy to share your memories.

Alan Birkholm Parrish was born in Fort Bragg, California. He...

Send flowers to the Parrish family.