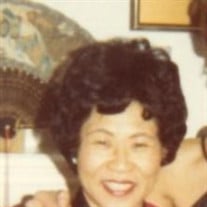 Akiko McClennan, 90, of Berkeley, California, passed away on Thursday, September 3, 2020. Akiko was born on January 5, 1930 in Yahata, Japan. She was the third child of the late Kinjiro and Tsuma Suzuki. Akiko had two older sisters, Fujiko and Mitsue. Akiko was born into a world on the brink of war. During her youth she would witness and later recount some of the horrible atrocities of a world at war. Her hometown, Yahata was firebombed during the final months of the war. In August of 1945, her town was a potential target for one of the two atomic bombs dropped on Japan. Factory workers released large amounts of black smoke into the air to obscure the town. The resulting smoke, combined with the cloudy weather, caused the plane in route to divert to its secondary target, Nagasaki, a fateful event that probably changed the trajectory of Akiko’s life. Akiko’s sense of thrift, salvage and saving was likely greatly influenced by life in post war Japan. Following the war, Akiko worked as a barber. Sometime around 1950, one of her customers was an American Army soldier, Melville L. McClennan. Ultimately romance blossomed between these two people from different parts of the world. Akiko and Heck, as Melville was known to his family, married on August 28, 1951 in Japan. Akiko soon became a typical Army bride, travelling from base to base with her husband. She lived on bases in Japan, California, and Puerto Rico. Akiko and Melville had two daughters, both born on military bases -- Betty at Fort Ord, near Monterey, California, and Linda at The Presidio in San Francisco, California. In 1955, Akiko and Heck bought a house in Berkeley which became their “home” for the remainder of their lives. They had an affectionate way of addressing each other, “Arki” as Heck would call her and “Hecki–san” as Akiko would call him. In addition to her family, especially her daughters Betty and Linda and her grandson Daron, Akiko’s loves included, sewing, making dolls, world travel, Ikebana (the Japanese art of flower arrangement), Japanese Tea Ceremonies and gardening. Akiko made many of her own clothes as well as clothes for her daughters. The clothing she made was seamstress quality as she always aimed for perfection. Akiko also started to make dolls while still in Japan. She started with simple (kokeshi) dolls with basic features. She was soon making dolls with intricate details including hair and fingers, some clothed in kimonos, which she also made. Akiko had the opportunity to travel the world extensively. She has been on every continent, including Antarctica. She often travelled with groups and made many lasting friendships with her fellow travelers. She loved hosting and eventually teaching formal tea ceremonies. She built a tea house in her backyard where she hosted and taught the art of Tea Ceremony. She was involved formally in Tea Ceremonies for more than forty years. She was a member of Omotesenke Domonkai – Northern California Branch. Akiko made several trips to Kyoto, Japan for the international conventions of this organization. She became a certified “sensei” (teacher) and taught for more than twenty-five years wearing kimonos and observing all the traditional aspects of the ceremony. The practice of tea ceremony was one of the many ways that Akiko maintained and celebrated her Japanese culture. Even though almost all her adult life was spent in the United States, Akiko forever held true to her Japanese self, from language to food and culture. Akiko was an accomplished cook and loved hosting dinner parties where she prepared the traditional Japanese cuisine that she grew up with. Her elaborate New Year’s Day feast was something friends and family looked forward to each year. And then there was her gardening, a labor of love. Her immaculate front yard, resplendent with trees, plants, and flowers, was chosen by the City of Berkeley to showcase the landscaping as the most beautiful yard. The rear yard was functional as well as beautiful, abundant with fruit trees, vegetables, and even a koi pond. Akiko cared for her garden the way a mother cares for her child. She even wrapped maturing apples and pears in paper to protect them from birds and insects. Neighbors marveled at the precision with which she practiced horticulture. Toward the end of her life, her garden became her raison d’etre. Every day she pushed herself to get outdoors, because her garden needed the care only she could provide. As fate would have it, it was in her garden that she transitioned from this life. Akiko’s work was done. Akiko is predeceased by her husband, Melville L. McClennan. She is survived by two daughters, Betty McClennan (Randy Kashuba) of Oakland, California, and Linda McClennan (Ronald Colon) of Pinole, California, one grandson, Daron McClennan-Colon of Sunnyvale, California, and a host of nieces and nephews and their families in the United States and Japan. Viewing will take place on Thursday, September 17, 2020 from 3:00 PM until 7:00 PM at Chapel of the Chimes, 4499 Piedmont Avenue, Oakland, CA 94611. Celebration of Life will take place on Friday, September 18, 2020, 11:30 AM at Chapel of the Chimes, 4499 Piedmont Avenue, Oakland, CA 94611. Limited seating due to COVID19. Please contact family regarding attendance. In lieu of flowers, donations can be made in Akiko’s memory to J-SEI (https://j-sei.org). *** To ensure the health and safety of our community, we are following all guidelines set by local, state and CDC officials. If you are planning on attending a service, please contact the funeral home in advance, so that we can plan accordingly.

Akiko McClennan, 90, of Berkeley, California, passed away on Thursday, September 3, 2020. Akiko was born on January 5, 1930 in Yahata, Japan. She was the third child of the late Kinjiro and Tsuma Suzuki. Akiko had two older sisters, Fujiko... View Obituary & Service Information

The family of Akiko Janet McClennan created this Life Tributes page to make it easy to share your memories.

Akiko McClennan, 90, of Berkeley, California, passed away on...

Send flowers to the McClennan family.